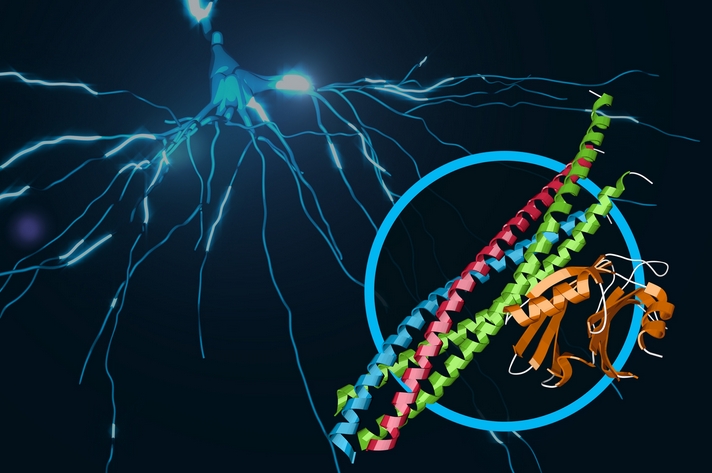 This illustration shows a protein complex at work in brain signaling. It contains two joined protein complexes:
SNARE, shown in blue, red, and green, and synaptotagmin-1, shown in orange. The combined complex is
responsible for the calcium-triggered release of neurotransmitters from our brain’s nerve cells in a process called
synaptic vesicle fusion. In the background, electrical signals travel through a neuron. (SLAC National Accelerator Laboratory)

(August 17, 2015)  Scientists have revealed never-before-seen details of how our brain sends rapid-fire messages between its cells. They mapped the 3-D atomic structure of a two-part protein complex that controls the release of signaling chemicals, called neurotransmitters, from brain cells. Understanding how cells release those signals in less than one-thousandth of a second could help launch a new wave of research on drugs for treating brain disorders.

The experiments, at the Linac Coherent Light Source (LCLS) X-ray laser at the Department of Energy’s SLAC National Accelerator Laboratory, build upon decades of previous research at Stanford University, Stanford School of Medicine and SLAC. Researchers reported their latest findings today in the journal Nature.

“This is a very important, exciting advance that may open up possibilities for targeting new drugs to control neurotransmitter release. Many mental disorders, including depression, schizophrenia and anxiety, affect neurotransmitter systems,” said Axel Brunger, the study’s principal investigator. He is a professor at Stanford School of Medicine and SLAC and a Howard Hughes Medical Institute investigator. 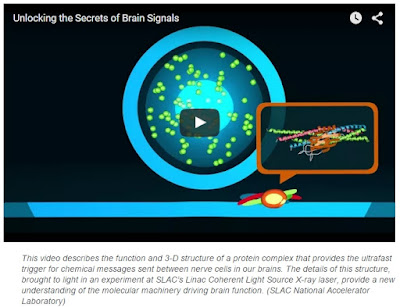 “Both parts of this protein complex are essential,” Brunger said, “but until now it was unclear how its two pieces fit and work together.”

The two protein parts are known as neuronal SNAREs and synaptotagmin-1.

Earlier X-ray studies, including experiments at SLAC’s Stanford Synchrotron Radiation Lightsource (SSRL) nearly two decades ago, shed light on the structure of the SNARE complex, a helical protein bundle found in yeasts and mammals. SNAREs play a key role in the brain’s chemical signaling by joining, or “fusing,” little packets of neurotransmitters to the outer edges of neurons, where they are released and then dock with chemical receptors in another neuron to trigger a response.

A ‘Smoking Gun’ for Neurotransmitter Release

In this latest research, the scientists found that when the SNAREs and synaptotagmin-1 join up, they act as an amplifier for a slight increase in calcium concentration, triggering a gunshot-like release of neurotransmitters from one neuron to another. They also learned that the proteins join together before they arrive at a neuron’s membrane, which helps to explain how they trigger brain signaling so rapidly. 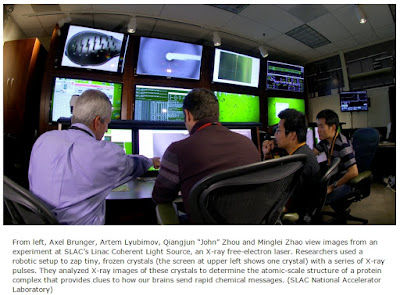 “The neuron is not building the ‘gun’ as it sits there on the membrane – it’s already there,” Brunger said.

The team speculates that several of the joined protein complexes may group together and simultaneously interact with the same vesicle to efficiently trigger neurotransmitter release, an exciting area for further studies.