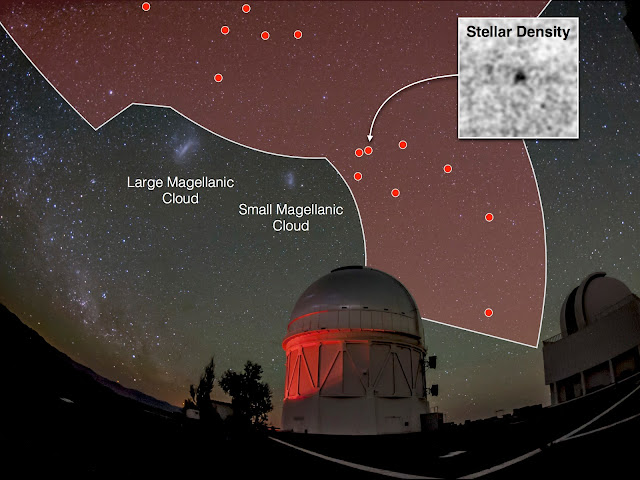 The Dark Energy Survey has now mapped one-eighth of the full sky (red shaded region) using the
Dark Energy Camera on the Blanco telescope at the Cerro Tololo Inter-American Observatory in
Chile (foreground). This map has led to the discovery of 17 dwarf galaxy candidates in the past six
months (red dots), including eight new candidates announced today. Several of the candidates are in
close proximity to the two largest dwarf galaxies orbiting the Milky Way, the Large and Small
Magellanic Clouds, both of which are visible to the unaided eye. By comparison, the new stellar
systems are so faint that they are difficult to “see” even in the deep DES images and can be more
easily visualized using maps of the stellar density (inset). Fourteen of the dwarf galaxy candidates
found in DES data are visible in this particular image. Illustration: Dark Energy Survey Collaboration

(August 18, 2015)  Scientists on the Dark Energy Survey, using one of the world’s most powerful digital cameras, have discovered eight more faint celestial objects hovering near our Milky Way galaxy. Signs indicate that they, like the objects found by the same team earlier this year, are likely dwarf satellite galaxies, the smallest and closest known form of galaxies.

Satellite galaxies are small celestial objects that orbit larger galaxies, such as our own Milky Way. Dwarf galaxies can be found with fewer than 1,000 stars, in contrast to the Milky Way, an average-size galaxy containing billions of stars. Scientists have predicted that larger galaxies are built from smaller galaxies, which are thought to be especially rich in dark matter, the substance that makes up about 25 percent of the total matter and energy in the universe. Dwarf satellite galaxies, therefore, are considered key to understanding dark matter and the process by which larger galaxies form.

The main goal of the Dark Energy Survey (DES), as its name suggests, is to better understand the nature of dark energy, the mysterious stuff that makes up about 70 percent of the matter and energy in the universe. Scientists believe that dark energy is the key to understanding why the expansion of the universe is speeding up. To carry out its dark energy mission, DES takes snapshots of hundreds of millions of distant galaxies. However, some of the DES images also contain stars in dwarf galaxies much closer to the Milky Way. The same data can therefore be used to probe both dark energy, which scientists think is driving galaxies apart, and dark matter, which is thought to hold galaxies together.