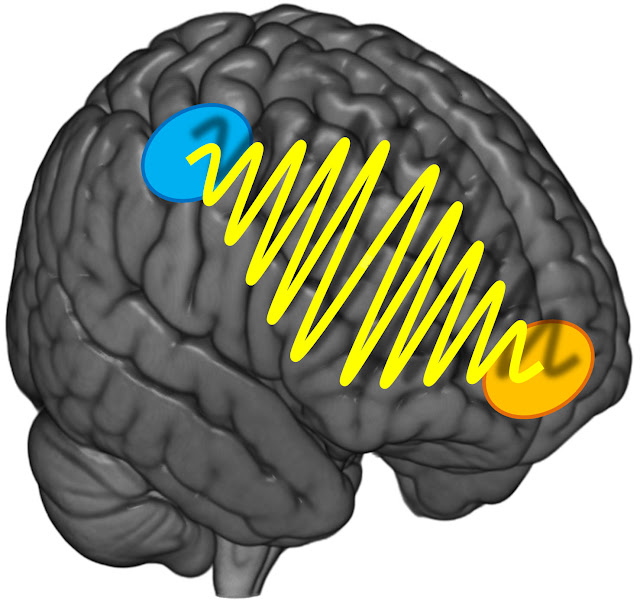 Preference-based decisions were less stable if the information flow between
the two brain regions was disrupted.

(August 20, 2015)  Some people find it difficult to make decisions. In a new study, neuroeconomists from the University of Zurich now reveal that the intensity of the communication between different regions of the brain dictates whether we are indecisive or not.

It’s the same old story: You’re in a restaurant and can’t make up your mind what to order. After studying the menu for some time and many discussions, you eventually choose the steak. But you can’t relax during the meal and keep wondering whether you should have gone for the veal after all. Such difficulties with decisions crop up in all aspects of life, not only food. However, they predominantly affect preference-based decisions, i.e. questions like «what do I prefer – melon or cherries?». Purely sensory decisions based on sensorial information such as «what is bigger – melon or cherry?» are less prone to indecisiveness.

The more intensive the information flow, the more decisive

How come some people are so uncertain of their preferences and keep making new choices while others know exactly what they like and want? A team headed by Professor Christian Ruff, a neuroeconomist from the University of Zurich, set about investigating this question. The Zurich researchers discovered that the precision and stability of preference decisions do not only depend on the strength of the activation of one or more brain regions. Instead, the key for stable preference choices is the intensity of the communication between two areas of the brain which represent our preferences or are involved in spatial orientation and action planning.

The researchers used transcranial alternating current stimulation, a non-invasive brain stimulation method that enables generation of coordinated oscillations in the activity of particular brain regions. The test subjects did not realize that they were being stimulated. Using this technique, the researchers intensified or reduced the information flow between the prefrontal cortex located directly below the forehead and the parietal cortex just above both ears. The test subjects had to make preference-based or purely sensory decisions about food.