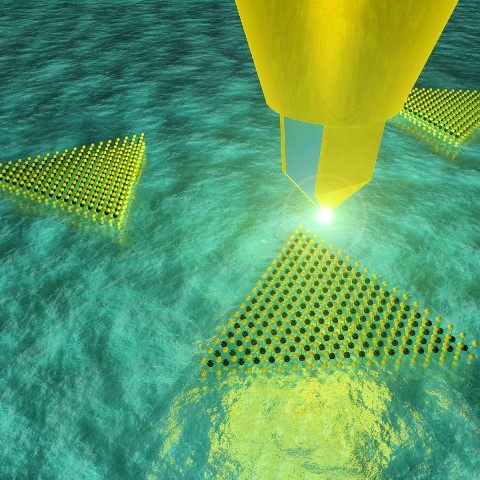 With the Campanile probe, optical excitation and collection are spatially confined
to the nano-sized gap at the apex of the tip, which is scanned over the sample,
recording a full emission spectrum at each position.

(August 15, 2015)  Scientists with the U.S. Department of Energy (DOE)’s Lawrence Berkeley National Laboratory (Berkeley Lab) have used a unique nano-optical probe to study the effects of illumination on two-dimensional semiconductors at the molecular level. Working at the Molecular Foundry, a DOE Office of Science User Facility, the scientific team used the “Campanile” probe they developed to make some surprising discoveries about molybdenum disulfide, a member of a family of semiconductors, called “transition metal dichalcogenides (TMDCs), whose optoelectronic properties hold great promise for future nanoelectronic and photonic devices.

“The Campanile probe’s remarkable resolution enabled us to identify significant nanoscale optoelectronic heterogeneity in the interior regions of monolayer crystals of molybdenum disulfide, and an unexpected, approximately 300 nanometer wide, energetically disordered edge region,” says James Schuck, a staff scientist with Berkeley Lab’s Materials Sciences Division. Schuck led this study as well as the team that created the Campanile probe, which won a prestigious R&D 100 Award in 2013 for combining the advantages of scan/probe microscopy and optical spectroscopy. 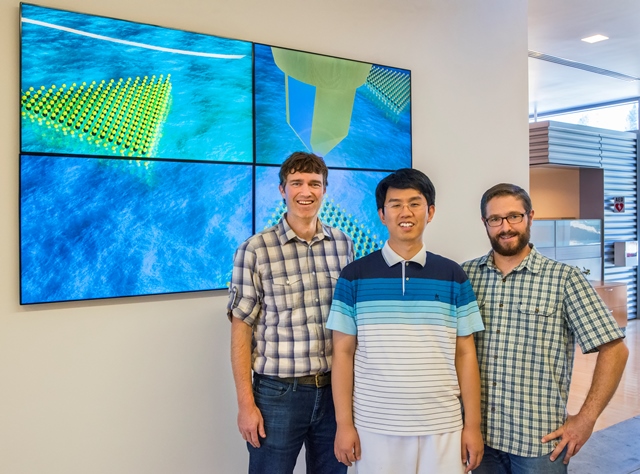 (From left)Jim Schuck, Wei Bao and Nicholas Borys at the Molecular Foundry
where they made surprising discoveries about 2D MoS2, a promising TMDC
semiconductor for future photonic and nanoelectronic devices. (Photo by Roy Kaltschmidt)

“This disordered edge region, which has never been seen before, could be extremely important for any devices in which one wants to make electrical contacts,” Schuck says. “It might also prove critical to photocatalytic and nonlinear optical conversion applications.” 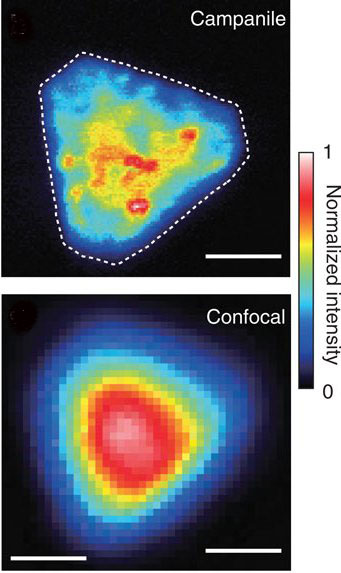 Schuck, who directs the Imaging and Manipulation of Nanostructures Facility at the Molecular Foundry, is the corresponding author of a paper describing this research in Nature Communications. The paper is titled “Visualizing nanoscale excitonic relaxation properties of disordered edges and grain boundaries in monolayer molybdenum disulfide.” The co-lead authors are Wei Bao and Nicholas Borys. (See below for a complete list of authors.)