(August 18, 2015)  Instability in engineering is generally not a good thing. If you’re building a skyscraper, minor instabilities could bring the whole structure crashing down in a fraction of a second. But what if a quick change in shape is exactly what you want?

Soft machines and robots are becoming more and more functional, capable of moving, jumping, gripping an object, and even changing color.  The elements responsible for their actuation motion are often soft, inflatable segments called fluidic actuators. These actuators require large amounts of air or water to change shape, making the machines slow, bulky and difficult to untether.

A team of researchers at the Harvard John A. Paulson School of Engineering and Applied Science (SEAS) has engineered a new, soft actuator that harnesses the power of instability to trigger instantaneous movement. 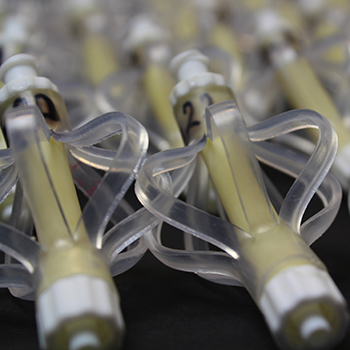 These new, soft actuators harnesses the power of instability to trigger
instantaneous movement (photo courtesy of the Bertoldi Group)

The research was led by Katia Bertoldi, the John L. Loeb Associate Professor of the Natural Sciences, member of the Kavli Institute for Bionano Science and Technology, and faculty associate of the Materials Research Science and Engineering Center. The work is described in a paper in the Proceedings of the National Academy of Sciences.

The actuator is inspired by a famous physics experiment in which two balloons are inflated to different sizes and connected via a tube and valve. When the valve is opened, air flows between the balloons. Instead of equalizing in size, as one might expect, the larger balloon inflates more while the smaller balloon deflates.

This unexpected behavior comes from the balloons’ non-linear relationship between pressure and volume, meaning an increase in volume doesn’t necessarily increase the pressure.

“When inflating a balloon, the first few blows are the hardest but after reaching a critical pressure it becomes easier,” said Johannes Overvelde, PhD student at SEAS and first author on the paper. “Similar to the balloons, in our research we connect fluidic segments in such a way that an interplay between their non-linear response results in unexpected behavior. Certain combinations of these interconnected segments can result in fast moving instabilities with negligible change in volume.”