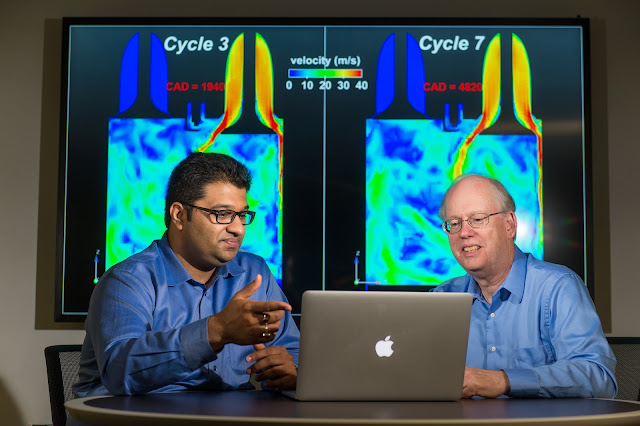 (August 24, 2015)  When you’re trying to understand the complex inner workings of a virtual engine, with its millions of variables and untold number of uncertainties, the most important horsepower number isn’t the one under the hood; it’s the one in the computer rack next door.

Researchers at the U.S. Department of Energy’s Argonne National Laboratory will be testing the limits of computing horsepower this year with a new simulation project from the Virtual Engine Research Institute and Fuels Initiative (VERIFI) that will harness 60 million computer core hours to dispel those uncertainties and pave the way to more effective engine simulations.

The work will be conducted on MIRA, which is currently the fifth-fastest supercomputer in the world and serves as the epicenter of the Argonne Leadership Computing Facility (ALCF), a DOE Office of Science User Facility. VERIFI has been working for two years to gain a deeper understanding of the complex dynamics at work in engine combustion. While VERIFI has used powerful computers before, it has never accessed a computer with the horsepower of MIRA and the abilities to unlock the deepest secrets of combustion.