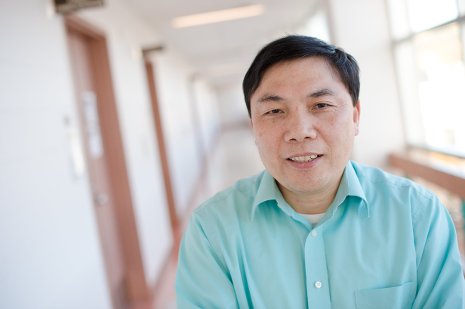 (August 20, 2015)  Mimicking photosynthesis is not easy. The bottleneck of artificial photosynthesis is visible light, because converting it into other forms of energy is not efficient. Researchers at Michigan Technological University have found a way to solve this issue, leading to an efficient technique to produce hydrogen fuel. Last week, the Journal of Physical Chemistry published their work.

The technique was developed by Yun Hang Hu, the Charles and Carroll McArthur professor of Materials Science and Engineer, and his PhD student, Bing Han, at Michigan Tech.

“Hydrogen is the future of cars,” says Hu. “And if you want to power hydrogen cars, you have to make hydrogen fuels.”

In this new hydrogen production process, the key is the interactions of a catalyst, light and a sacrificial molecule.

Playbook of Black Titanium Dioxide, Methanol and Light
As if in a complex sports game, the exchanges and counters between the materials used to split water look like a chemistry playbook. The players are black titanium dioxide (TiO2) and methanol (CH3OH) pitted against electron-hole recombination. 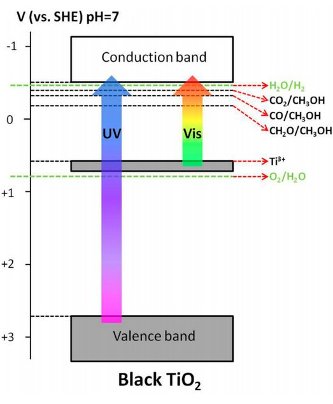 The goal of the game is to produce hydrogen molecules. Basically, that’s done by moving an electron from one place to another, like kicking a football to get a field goal. To make that score, a water molecule captures an electron excited within a material. When excited, electrons move up and down in different bands; the lower one here is the valence band and the higher one is the conduction band. The valence band and the conduction band are like goal posts, and between them is the band gap, which is like the playing field. The excited electron is the ball being passed around.

Solar energy, with both ultraviolet (UV) and visible light energy, is what gets this ball rolling. Light energy bounces off the first player, titanium dioxide, which is the material where the valence band and conduction band are in play. That excites an electron, making it a photo-excited charge that shoots up towards the conduction band. For UV light, the playing field is pretty big, and the band gap stretches 3.2 electron volts wide.