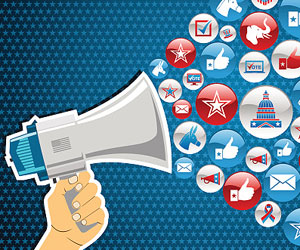 (August 27, 2015)  Twitter offers a public platform for people to post and share all sorts of content, from the serious to the ridiculous. While people tend to share political information with those who have similar ideological preferences, new research from NYU’s Social Media and Political Participation Lab demonstrates that Twitter is more than just an “echo chamber.”

“Platforms like Twitter or Facebook are creating unprecedented opportunities for citizens to communicate with their peers about current events,” says researcher Pablo Barberá of New York University, lead author on the study. “The conventional wisdom is that these environments exacerbate social extremism and political polarization, but we find that online communication structures are really flexible and situation-specific.”

Barberá and his co-authors—John T. Jost, Jonathan Nagler, Joshua A. Tucker, and Richard Bonneau—decided to take advantage of a new method of estimating the ideological positions of millions of Twitter users to investigate the dynamics of online conversations with respect to a wide range of public issues.

Barberá and colleagues investigated the structure and content of Twitter conversations about politicized issues such as the federal budget, marriage equality, the 2012 presidential campaign, and the 2013 government shutdown. And they also looked at non-political issues such as the 2014 Super Bowl and the Boston Marathon bombing. Their data set contained nearly 150 million tweets that mentioned specific keywords related to these topics.