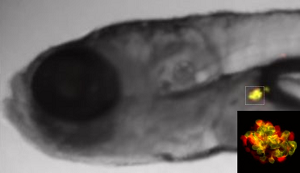 (August 19, 2015)  In experiments with 500,000 genetically engineered zebrafish embryos, Johns Hopkins scientists report they have developed a potentially better and more accurate way to screen for useful drugs, and they have used it to identify 24 drug candidates that increase the number of insulin-producing cells in the pancreas

The novel fish embryo technique, which the researchers say may yield new treatments for diabetes and potentially speed new drug discoveries for other diseases, is described in the Aug. 14 edition of eLife. “More studies need to be done, but we think there’s potentially no limit on the diseases this screening technique could be applied to other than the human imagination,” says Jeffrey Mumm, Ph.D., associate professor of ophthalmology at the Johns Hopkins Wilmer Eye Institute and McKusick-Nathans Institute of Genetic Medicine at the Johns Hopkins University School of Medicine.

Essentially, says Mumm, their method is an adaptation of high throughput screening (HTS), an automated system developed in the 1980s that uses robotic equipment to “dose” cell or tissue samples with candidate drugs in wells of lab dishes known as microtiter plates. The plates act as miniature test tubes and enable specially programmed computers to find chemical compounds that produce a desired effect, such as prompting cells to produce particular proteins or increase in number, positive findings known as hits. Because the microtiter plates contain hundreds of wells and the entire process is automated, tens of thousands of samples can be processed daily, increasing the chances of finding a hit quickly.