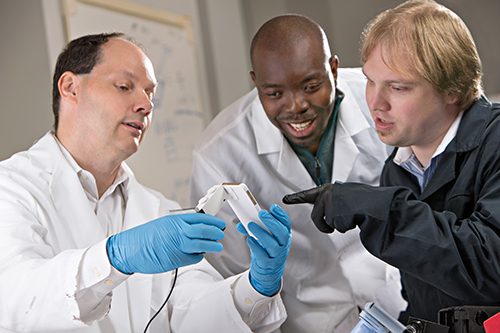 (August 25, 2015)  New technology that transforms a cell phone into a powerful, mobile microscope could significantly improve malaria diagnoses and treatment in developing countries that often lack the resources to address the life-threatening disease, says a Texas A&M University biomedical engineer who has created the tool.

The add-on device, which is similar in look and feel to a protective phone case, makes use of a smart phone’s camera features to produce high-resolution images of objects 10 times smaller than the thickness of a human hair, says Gerard Coté, professor of biomedical engineering and director of the Texas A&M Engineering Experiment Station’s Center for Remote Health Technologies and Systems. Coté’s development of the instrument, known as a mobile-optical-polarization imaging device (MOPID), is detailed in the online scientific journal Scientific Reports, published by Nature. The full article can be accessed at www.nature.com/articles/srep13368. 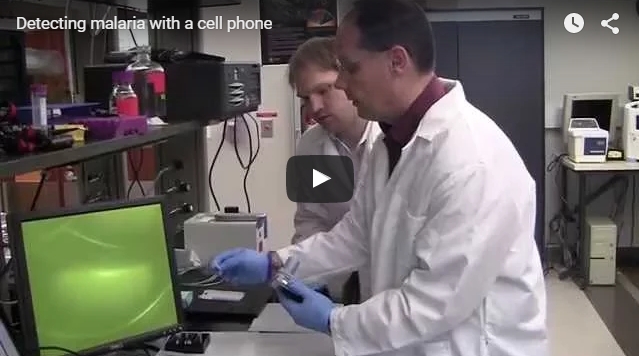 MOPID, Coté explains, is capable of accepting a small cartridge containing a patient’s blood-smear sample. The sample is then imaged using polarized light in order to detect the presence of hemozoin crystals, Coté notes. Hemozoin crystals are the byproduct of the malaria parasite, and they occur in the blood of an infected host. As polarized light bounces off of these crystals, they appear as tiny bright dots when observed through the phone’s camera lens – enabling an instant, accurate diagnosis.

While polarized light has been the preferred option for malaria detection due to its increased sensitivity, its implementation into mainstream microscopy has been hindered by its complex configurations, maintenance, size and cost – up until now.

“What we’ve achieved with MOPID is the design of a polarized microscope platform using a cell phone, which can detect birefringence in histological specimens infected with the malaria parasite,” Coté says. “It’s a simple, low-cost, portable device that we believe is more sensitive than the standard microscope that uses white light and just as accurate as the more costly and complex benchtop version of a polarized microscope.” 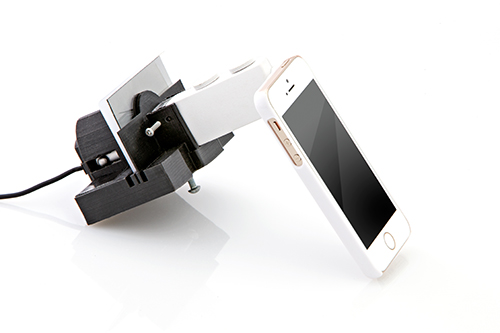 MOPID could represent a significant advancement in the detection methods for malaria, a disease that the World Health Organization estimates was responsible for 584,000 deaths in 2013, along with an estimated 198 million new cases in that span of time. Given those numbers, a dire need exists for a low-cost, accurate and portable method of detection, particularly in areas of the world with few resources, Coté says. Many of these regions, he notes, suffer from misdiagnoses due to inadequate or even nonexistent medical infrastructures – and the consequences can be devastating. While failure to treat malaria can be fatal, the administering of unnecessary malaria medications as a result of misdiagnoses can results in new, drug-resistant strains of the disease in addition to increasing costs for malaria medications, Coté notes.

Coté’s solution takes advantage of existing mobile phone technology and networks – something to which a whopping 75 percent of the world has access. This ever-increasing access to mobile networks and the fact that most mobile phones are equipped with advanced camera features make mobile phones the ideal platform for advanced imaging applications such as MOPID, Coté says.