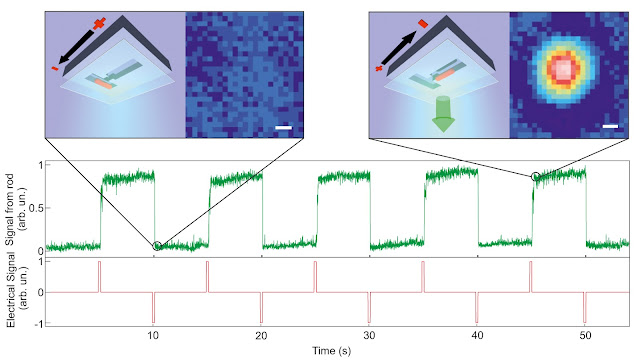 A nanorod is switched between two states – bright (high signal) and dark  (low signal) by an
external electrical pulse (red trace). The state of the rod can be readout instantaneously
at any time using polarized light. The rod stores the most recently written state until the
arrival of the next «write pulse». (Image: UZH)

(August 18, 2015)  For the first time ever, researchers have succeeded in creating arrangements of colloids – tiny particles suspended in a solution – and, importantly, they have managed to control their motion with high precision and speed. Thanks to this new technique developed by scientists at the University of Zurich, colloidal nanoparticles may play a role in digital technologies of the future. Nanoparticles can be rapidly displaced, require little energy and their small footprint offers large storage capacity – all these attributes make them well suited to new data storage applications or high-resolution displays.

Colloids are minute particles that are finely distributed throughout a liquid. Suspensions of colloidal particles are most familiar to us as beverages, cosmetics and paints. At a diameter in the range of ten to one hundred nanometres, a single such particle is invisible to the naked eye. These nanoparticles are constantly in motion due to the principle of Brownian motion. Since the particles are electrically charged, they experience forces of attraction and repulsion that can be harnessed to control and manipulate their behavior. In experiments carried out five years ago, Madhavi Krishnan, Professor of Physical Chemistry at the University of Zurich, succeeded in the controlled spatial manipulation of matter on the nanometer scale. In a new study, she and her colleagues have now demonstrated that it is not only possible to spatially confine nanoparticles, but also to control their position and orientation in time and to do so in a liquid, without using physical contact.