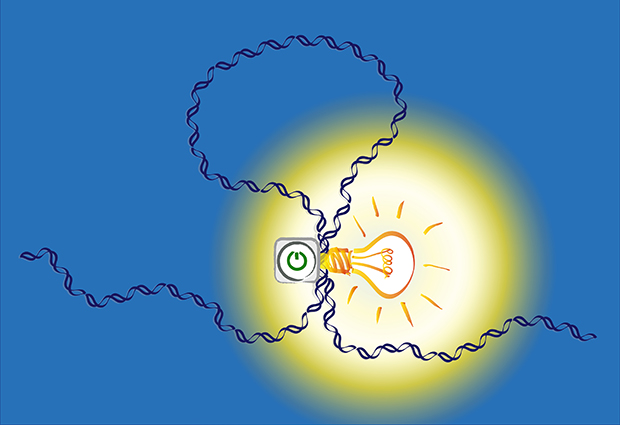 Genetic variants can ‘switch’ regulatory elements on or off. Credit: EMBL/P.Riedinger

(August 21, 2015)  Scientists at the European Molecular Biology Laboratory (EMBL) in Heidelberg, Germany, and Stanford University in the USA, have shed new light on how the variations in our molecular make-up, such as gene expression, are controlled within our DNA. The research, published today in Cell, leads to a greater understanding of how certain genetic variants can ‘switch’ on or off the regulatory elements which control the expression of genes and ultimately the manifestation of an individual’s characteristics and disease predispositions.

These variants are found in regions of the genome which are not directly responsible for coding genes, but which instead have a regulatory function. Not much is yet known about these regions, however, research into how the variants work could eventually lead to new clues about how human diseases might be understood at a genetic level and, ultimately, controlled.

“We know many genetic variants are associated with different diseases, but since most of them lie in the non-coding part of the genome, we often don’t know what the precise mechanisms underlying these associations are,” explains Judith Zaugg, who led the study at EMBL. “Our results, and the computational approaches we have developed mean it will now be possible to take these variants and link them back to the regulatory network within the DNA to identify the specific gene that is associated with them. This might enable us to unravel the causal mechanisms behind certain inherited diseases.”