EARTH’S MINERALOGY UNIQUE IN THE COSMOS 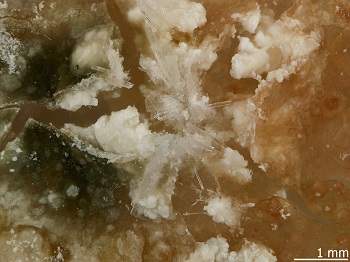 Caption: The mineral hazenite, named after Robert Hazen, which is only found
in one locality, Mono Lake, California. Like hazenite, 22 percent of known minerals
are found in just one locality. The image is courtesy of Courtesy of Hexiong Yang.

(August 26, 2015)  New research from a team led by Carnegie’s Robert Hazen predicts that Earth has more than 1,500 undiscovered minerals and that the exact mineral diversity of our planet is unique and could not be duplicated anywhere in the cosmos.

Nearly a decade ago, Hazen developed the idea that the diversity explosion of planet’s minerals from the dozen present at the birth of our Solar System to the nearly 5,000 types existing today arose primarily from the rise of life. More than two-thirds of known minerals can be linked directly or indirectly to biological activity, according to Hazen. Much of this is due to the rise of bacterial photosynthesis, which dramatically increased the atmospheric oxygen concentration about 2.4 billion years ago. 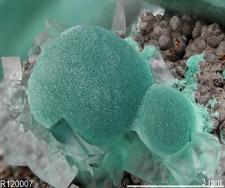 “Minerals follow the same kind of frequency of distribution as words in a book,” Hazen explained. “For example, the most-used words in a book are extremely common such as ‘and,’ ‘the,’ and ‘a.’ Rare words define the diversity of a book’s vocabulary. The same is true for minerals on Earth. Rare minerals define our planet’s mineralogical diversity.”

Further statistical analysis of mineral distribution and diversity suggested thousands of plausible rare minerals either still await discovery or occurred at some point in Earth’s history, only to be subsequently lost by burial, erosion, or subduction back into the mantle. The team predicted that 1,563 minerals exist on Earth today, but have yet to be discovered and described.