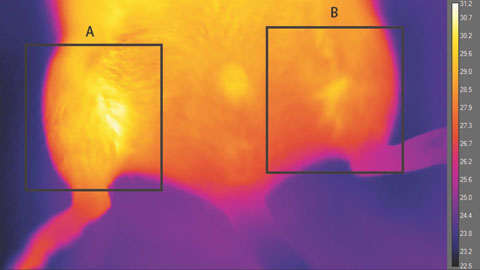 (August 20, 2015)  Scientists at UC Berkeley have developed a novel way to engineer the growth and expansion of energy-burning “good” fat, and then found that this fat helped reduce weight gain and lower blood glucose levels in mice.

The authors of the study, published Aug. 20 in the journal Diabetes, said their technique could eventually lead to new approaches to combat obesity, diabetes and other metabolic disorders.

The researchers used a specifically tailored hydrogel to “scaffold” and control an implant containing stem cells to form a functional brown-fat-like tissue. While white fat — the kind associated with obesity — stores excess energy, brown fat serves as a heat generator, burning calories as it does its job. 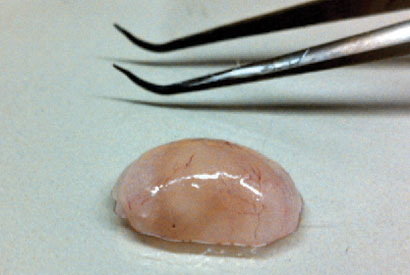 Appearance of implant, less than a centimeter long, removed after two weeks.
Notably, the fat shows the development of blood vessels and a marked brown hue.
(Photo by Kevin Tharp and Andreas Stahl)

“What is truly exciting about this system is its potential to provide plentiful supplies of brown fat for therapeutic purposes,” said study lead author Kevin Tharp, a Ph.D. student in the Department of Nutritional Sciences and Toxicology. “The implant is made from the stem cells that reside in white fat, which could be made from tissue obtained through liposuction.”

Human babies, which cannot yet produce heat by shivering, have greater stores of brown fat, so-called because it contains high levels of darker-hued mitochondria. It was once believed that brown fat disappears with age, but in recent years, this tissue has been discovered in the neck, shoulders, and spinal cord among adults. 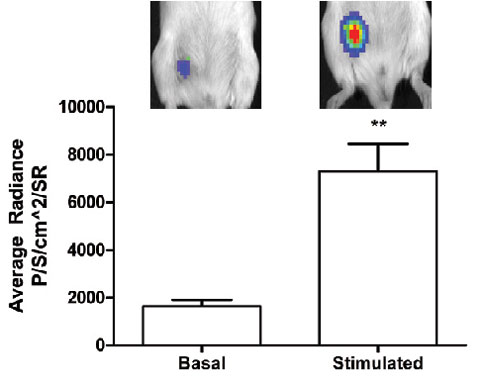 Implants respond to a stimulated cold challenge with increased fat uptake.
Images on top are anesthetized animals with implants that emit light
proportionally to the uptake rate of fatty acids. The bar graphs show the
higher rate of activity under stimulated conditions.
(Image by Kevin Tharp and Andreas Stahl)

“This is figuratively and literally a hot area of research right now,” said the study’s senior author, Andreas Stahl, an associate professor of nutritional sciences and toxicology. “We are the first to implant in mice an artificial brown-fat depot and show that it has the expected effects on body temperature and beneficial effects on metabolism.”

Studies have shown that cold temperatures can bump up activity in brown fat. Stahl noted, however, that the exposure to cold often led to increases in food intake, as well, potentially negating any calorie-burning benefits from brown-fat activity.