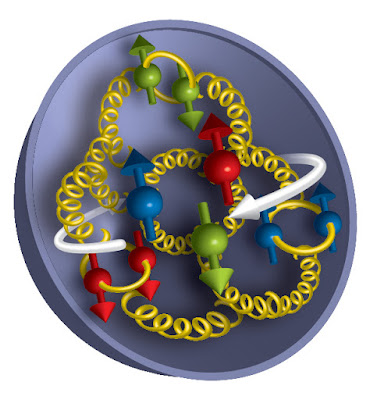 (December 29, 2015)  From creating the tiniest drops of primordial particle soup to devising new ways to improve batteries, catalysts, superconductors, and more, scientists at the U.S. Department of Energy's Brookhaven National Laboratory pushed the boundaries of discovery in 2015. Here, in no particular order, are our picks for the top 10 advances of the year.

In 2015, the Relativistic Heavy Ion Collider (RHIC), Brookhaven's flagship particle accelerator for nuclear physics research, shattered its own record for producing polarized proton collisions at 200-giga-electron-volt (GeV) collision energy. Thanks to the installation of "electron lenses" and other accelerator improvements, RHIC physicists routinely delivered 1200 billion polarized proton smashups per week—more than double the number routinely achieved in 2012 at the same collision energy. More collisions produce more data for scientists to analyze, increasing the precision of measurements and the potential for new discoveries about the protons' internal structure.

Also at RHIC, in collisions of small particles such as protons, deuterons, and helium nuclei with much larger nuclei of gold atoms, scientists discovered the same kind of particle flow they've observed in their gold-on-gold smashups. These findings reveal that the small particles can create tiny droplets of quark-gluon plasma (QGP)—a liquid-like soup of matter's most fundamental building blocks like the larger samples of QGP created in the gold-on-gold collisions. These experiments are revealing the key elements required for creating the QGP and could also offer insight into the initial state characteristics of the colliding particles.