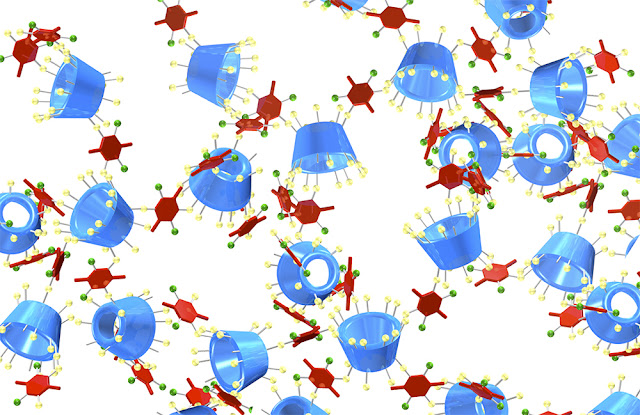 Dichtel Group
A porous material made from cup-shaped cyclodextrins, which rapidly bind
pollutants and remove them from contaminated water.

(December 21, 2015)  We’ve all seen the Febreze air fresheners, which employ a derivative of corn starch to trap invisible air pollutants in the home and remove unwanted odors.

A team of Cornell researchers has used the same material found in Febreze, cyclodextrin, to develop a technique that could revolutionize the water-purification industry.

The team is led by Will Dichtel, associate professor of chemistry and chemical biology and a 2015 MacArthur Foundation Fellowship winner. His group invented a porous form of cyclodextrin that has displayed uptake of pollutants through adsorption at rates vastly superior to traditional activated carbon – 200 times greater in some cases.

Activated carbons have the advantage of larger surface area than previous polymers made from cyclodextrin – “more sites for pollutants to stick to,” Dichtel said – but they don’t bind pollutants as strongly as cyclodextrin.