Ringing in a New Way to Measure and Modulate Trapped Light 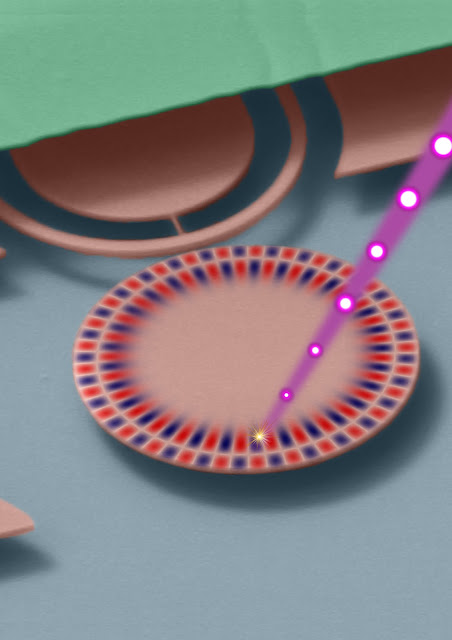 The focused ion-beam tool developed at the NIST Center for
Nanoscale Science and Technology can inject ions into the resonator,
creating tiny bulges that affect the structure’s resonant properties—akin
to how a bell maker can change the sound a bell makes by adding material and
changing its shape. Credit: NIST

(December 23, 2015)  Researchers working at the National Institute of Standards and Technology (NIST) have developed a novel way to noninvasively measure and map how and where trapped light vibrates within microscale optical resonators.*

The new technique not only makes for more accurate measurements but also allows scientists to fine-tune the trapped light’s frequency by subtly altering the shape of the resonator itself.

Visualizing the vibration patterns will help scientists to perfect ultrasensitive optical sensors for detecting biomolecules and even single atoms. The fine-tuning capability will also open the door to creating optical resonators with identical resonances, a feat now impossible to achieve during manufacturing, but necessary for applications such as quantum information processing with single photons.

Microscale optical resonators are like tiny bells that ring not with sound, but with light. Just like a bell’s tone, the frequency with which an optical resonator “rings” is determined by its size and shape, so that it amplifies and sustains some frequencies of light and diminishes others.

The devices are so tiny that the light actually extends outside their outer surfaces where they form “near-fields.” Where these vibrating near-fields are strongest, the resonator is hypersensitive to changes in the environment. Any perturbation of a near field, say by a stray molecule or atom, will affect the light inside the resonator in a detectable way, much in the same way that touching a ringing bell will change its tone or volume or silence the bell altogether.

Mapping these vibration patterns of light in real devices will help scientists to make them even more sensitive.

At present, the vibrational profiles of these resonators are measured using sharp, needle-like probes. The problem with using a probe is that it strongly disturbs the near-fields before it is able to get close enough to the surface to do high-resolution imaging. High-resolution imaging of the microresonator requires a probe that is able to reach the surface without disturbing the near fields.