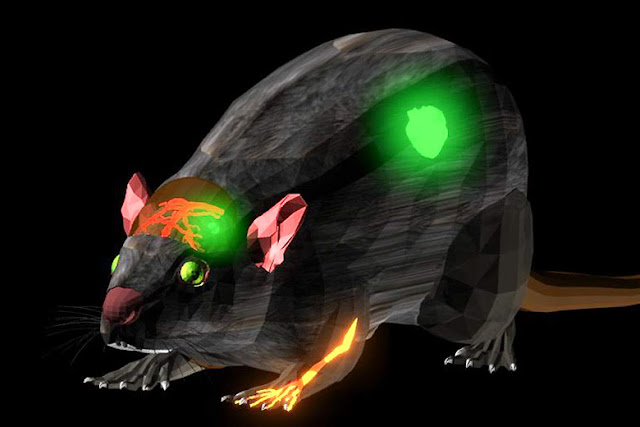 The NIR-II dye can clearly resolve blood vessels in the hindlimb as well as in the
brain with unprecedented clarity. Furthermore, the dye allows clear resolution of
tumors in the center of the mouse’s brain and is capable of ultra-sensitive tumor detection.
Alexander Antaris

(December 24, 2015) Glowing dyes help scientists see inside the body and diagnose ailments, but they needed a certain type of molecule to improve the imaging depth. They invented a long wavelength near-infrared fluorescent molecule, and it works.

In recent years, physicians and researchers have increasingly turned to glowing dyes to look beneath the skin. An eye doctor, for example, might inject a dye into a patient's blood before shining a bright light in her eye. The dye causes the blood vessels to glow, providing a roadmap of the patient's retina on a computer screen.

At Stanford and elsewhere, researchers have worked to create dyes that, when stimulated, emit light of long wavelengths close to infrared light. Such a light, which is not visible to the human eye, could then be viewed by a special camera and be projected to a monitor to produce deeper, sharper images from inside the body.

This fluorescent imaging can help to pinpoint tumor locations near the skin's surface in a variety of cancers, such as head and neck, melanoma and breast cancer.

Most of these dyes have safety concerns: Some made from carbon nanotubes or quantum dots can linger in the body for days and months, caught in the liver and spleen, before being excreted slowly. This drawback thus far has prevented their use in humans.