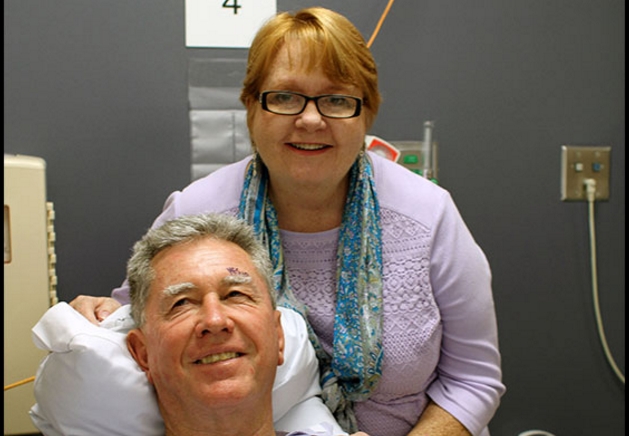 USC Eye Institute patient Terry Byland became the first person in the world to have two retinal prostheses – one in each eye – and his progress regaining some sight signals hope for people going blind from Retinitis pigmentosa.

“I just can’t get over what I can see, and all the things I’ve seen so far,” said Byland, the 66 year-old resident of Riverside, Calif.

The reason: the Argus II Retinal Prosthesis system, the first FDA-approved implanted device to re-establish some sight in blind patients, giving them the ability to perceive images and movement.

Like most people diagnosed with Retinitis pigmentosa, Byland experienced gradual blindness, going completely dark at the age of 45, when his youngest son was just five years old. He had to retire from the job he loved, selling power tools.

“It’s one thing to give up driving, but it’s another thing to give up your work,” Byland said. “My co-workers were like a second family. I struggled with depression and mood swings. It’s paralyzing to lose your sight.”

Byland was part of the clinical trial for the original prosthesis, Argus I, from 2004 to 2010. His right eye was implanted with a 16-electrode retinal prosthesis on June 23, 2004.

“That study gave me a sense of worth,” said Byland. “The biggest thing for me was to see how far we could go before we hit that wall. The prosthesis allows more independence. And the more independent you are, the happier you are.”

An Eye Toward the Future

“Terry is a true pioneer,” said Mark Humayun, MD, PhD, co-inventor of the device, who holds joint appointments at the Keck School of Medicine of USC and the USC Viterbi School of Engineering. “His work with the first-generation implant helped our team develop the FDA-approved Argus II. For him to enjoy the benefit of this smaller, better device is gratifying.”