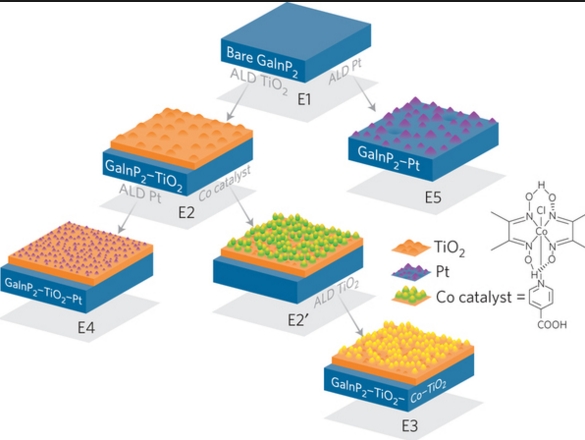 NREL's scientists took a different approach to the PEC process, which uses solar energy to split water into hydrogen and oxygen. The process requires special semiconductors, the PEC materials and catalysts to split the water. Previous work used precious metals such as platinum, ruthenium and iridium as catalysts attached to the semiconductors. A large-scale commercial effort using those precious metals wouldn't be cost-effective, however.

The use of cheaper molecular catalysts instead of precious metals has been proposed, but these have encountered issues with stability, and were found to have a lifespan shorter than the metal-based catalysts.

Instead, the NREL researchers decided to examine molecular catalysts outside of the liquid solution they are normally studied in to see if they could attach the catalyst directly onto the surface of the semiconductor. They were able to put a layer of titanium dioxide (TiO2) on the surface of the semiconductor and bond the molecular catalyst to the TiO2.

Their work showed molecular catalysts can be as highly active as the precious metal-based catalysts.

Their research, "Water Reduction by a p-GaInP2 Photoelectrode Stabilized by an Amorphous TiO2 Coating and a Molecular Cobalt Catalyst," has been published in Nature Materials. Jing Gu and Yong Yan are lead authors of the paper. Contributors James Young, Nathan Neale and John Turner are all with NREL's Chemistry and Nanoscience Center. Contributor K. Xerxes Steirer is with NREL's Materials Science Center.

"Hopefully you would not have to do that every day, but it does point to the fact that low stability but highly active catalysts could be viable candidates as a long-term solution to the scalability issue for PEC water splitting systems," Turner said.