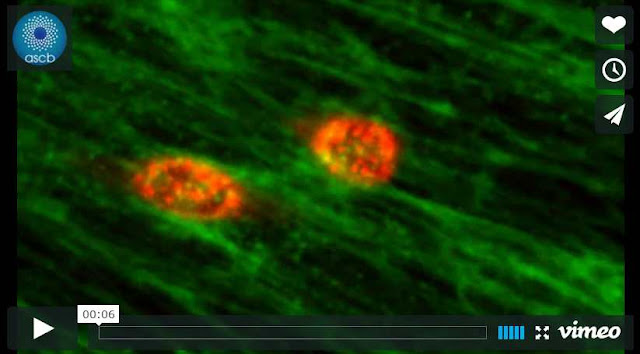 To get moving, metastasizing cancer needs to enlist non-cancerous collaborators. Suspicions about where these secret cancer allies might be lurking have long been directed at the fibroblasts, the cells that secrete and organize the extracellular matrix (ECM), the ground on which surrounding cells can get a grip. Increasing evidence suggests that fibroblasts near growing tumors are actively assisting cancer cells in spreading locally and metastasizing elsewhere. But exactly how these cancer-associated fibroblasts (CAFs) provide aid to the cancer enemy was not known until a recent discovery by Begum Erdogan and colleagues in Donna Webb’s lab at Vanderbilt University—CAFs clear a highway through the ECM for migrating cancer cells. The researchers will present their work at ASCB 2015 in San Diego on Sunday, December 13 and Tuesday, December 15.

The roadway that CAFs arrange is made of parallel fibers of fibronectin (Fn), a major protein in the ECM mix secreted by all fibroblasts. The Vanderbilt researchers observed CAFs rearranging Fn into parallel bundles instead of the dense mesh that normal tissue fibroblasts (NAFs) make. Taking cancer cells grown from prostate as well as head and neck tumors, the researchers plated them on ECM from CAFs and NAFs. The cancer cells on the CAF matrix were better at moving in a single direction.