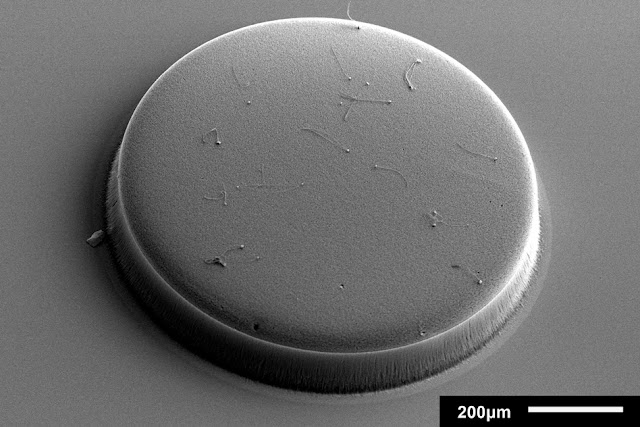 A patterned and cylindrical structure made up of carbon nanotubes.
Courtesy of the researchers

The team modified a simple microfluidic channel with an array of vertically aligned carbon nanotubes — rolled lattices of carbon atoms that resemble tiny tubes of chicken wire. The researchers had previously devised a method for standing carbon nanotubes on their ends, like trees in a forest. With this method, they created a three-dimensional array of permeable carbon nanotubes within a microfluidic device, through which fluid can flow.

Now, in a study published this week in the Journal of Microengineering and Nanotechnology, the researchers have given the nanotube array the ability to trap certain particles. To do this, the team coated the array, layer by layer, with polymers of alternating electric charge.

“You can think of each nanotube in the forest as being concentrically coated with different layers of polymer,” says Brian Wardle, professor of aeronautics and astronautics at MIT. “If you drew it in cross-section, it would be like rings on a tree.” 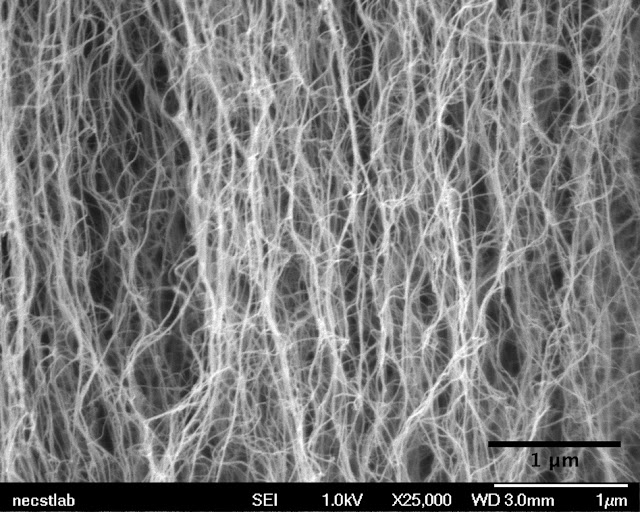 A zoomed in view of carbon nanotubes, showing individual tubes.

Depending on the number of layers deposited, the researchers can create thicker or thinner nanotubes and thereby tailor the porosity of the forest to capture larger or smaller particles of interest.

The nanotubes’ polymer coating may also be chemically manipulated to bind specific bioparticles flowing through the forest. To test this idea, the researchers applied an established technique to treat the surface of the nanotubes with antibodies that bind to prostate specific antigen (PSA), a common experimental target. The polymer-coated arrays captured 40 percent more antigens, compared with arrays lacking the polymer coating.

Wardle says the combination of carbon nanotubes and multilayer coatings may help finely tune microfluidic devices to capture extremely small and rare particles, such as certain viruses and proteins.