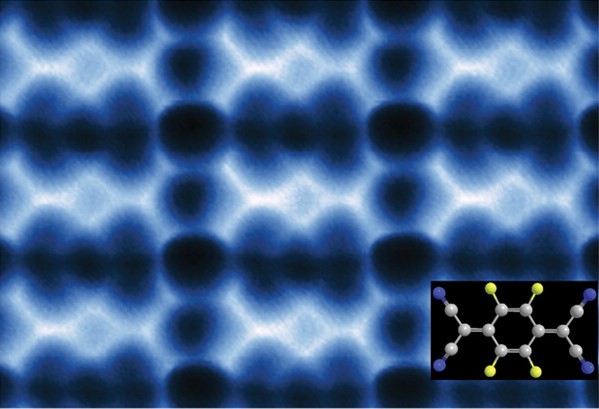 This AFM image shows 2D F4TCNQ islands on graphene/BN that could be used
to modify the graphene for electronic applications.

(December 22, 2015)  In what could prove to be a significant advance in the fabrication of graphene-based nanodevices, a team of Berkeley Lab researchers has discovered a new mechanism for assembling two-dimensional (2D) molecular “islands” that could be used to modify graphene at the nanometer scale. These 2D islands are comprised of F4TCNQ molecules that trap electrical charge in ways that are potentially useful for graphene-based electronics.

“We’re reporting a scanning tunneling microscopy and non-contact atomic force microscopy study of F4TCNQ molecules at the surface of graphene in which the molecules coalesce into 2D close-packed islands,” says Michael Crommie, a physicist who holds joint appointments with Berkeley Lab’s Materials Sciences Division and UC Berkeley’s Physics Department. “The resulting islands could be used to control the charge-carrier density in graphene substrates, as well as to modify how electrons move through graphene-based devices. They might also be used to form precise nanoscale patterns that exhibit atomic-scale structural perfection unmatched by conventional fabrication techniques.”