A Quantum Pump for Ultracold Atoms 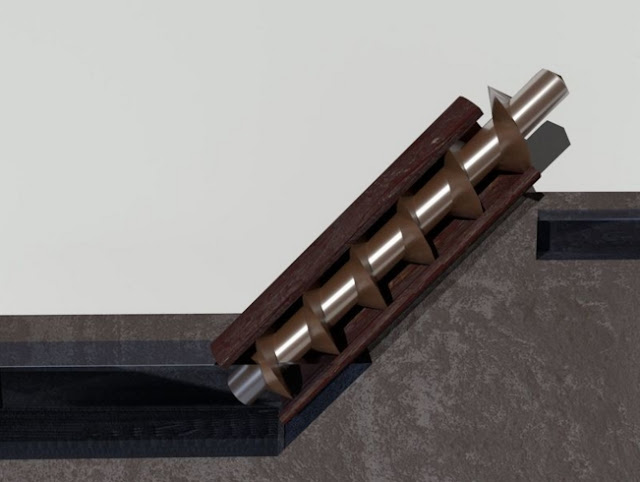 Archimedes screw. Continuous rotation of the screw pumps water from the lower-lying
reservoir into the upper one. MPQ, Quantum Many-Body Systems Division

(December 17, 2015)  Scientists from Munich realize a dynamic version of the quantum Hall effect in optical superlattices

The transport of particles is usually induced by applying an external gradient to a system. Water, for example, flows down a slope and electric current is generated by applying a voltage. But already in ancient times another way of generating a directional motion was known: by periodic modulation of a system, as can be seen in the famous Archimedes' screw. More than 30 years ago, the Scottish physicist David Thouless predicted that a similar phenomenon should also occur in quantum mechanical systems, so called topological pumping. A group of researchers from the Ludwig-Maximilians-Universität München and the Max Planck Institute of Quantum Optics, led by Professor Immanuel Bloch and in collaboration with the theoretical physicist Oded Zilberberg (ETH Zürich), have now successfully implemented such a topological charge pump with ultracold atoms in an optical lattice for the first time.

In 1983, inspired by the recently discovered two-dimensional quantum Hall effect, for which Klaus von Klitzing was awarded the Nobel prize in physics in 1985, Thouless came up with the idea that a similar phenomenon could also be observed in one-dimensional systems if their parameters are varied periodically. This dynamic version of the quantum Hall effect enables transport of particles without an external bias. Due to its special, so called topological properties, this transport occurs in a quantized fashion so that the particles move exactly by a well-defined distance per cycle. In addition, the transport is extremely robust with respect to external perturbations and is not affected by small changes of the system. This is of particular interest from a technological point of view since it could facilitate a more precise definition of the standard for electrical current. Despite long lasting efforts, however, the realization of such a quantized charge pump has remained out of reach up to now.

Ultracold atoms in optical lattices constitute an almost ideal model system for such experiments since they can be controlled and detected very well. Inside a vacuum, the atoms can be cooled to a temperature close to absolute zero and subsequently be transferred into a periodic potential that is created by the interference of multiple laser beams. A superlattice is a special kind of these optical lattices that is created by superimposing two standing waves of light with different periodicities. In the experiment in Munich, the periods of the lattices where chosen in such a way that they differ by a factor of two. This gives rise to double well potentials as shown in Fig. 2.