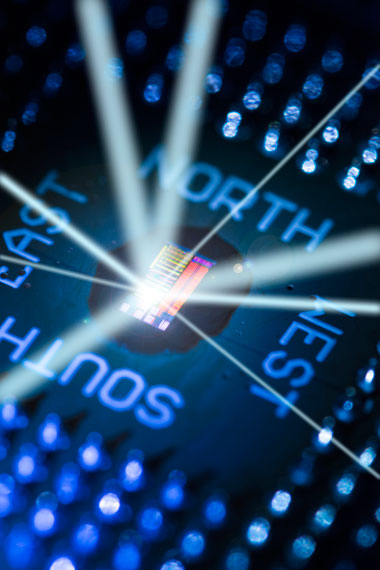 (December 23, 2015)  Engineers have successfully married electrons and photons within a single-chip microprocessor, a landmark development that opens the door to ultrafast, low-power data crunching.

The researchers packed two processor cores with more than 70 million transistors and 850 photonic components onto a 3-by-6-millimeter chip. They fabricated the microprocessor in a foundry that mass-produces high-performance computer chips, proving that their design can be easily and quickly scaled up for commercial production.

The new chip, described in a paper to be published Dec. 24 in the print issue of the journal Nature, marks the next step in the evolution of fiber optic communication technology by integrating into a microprocessor the photonic interconnects, or inputs and outputs (I/O), needed to talk to other chips.

“This is a milestone. It’s the first processor that can use light to communicate with the external world,” said Vladimir Stojanović, an associate professor of electrical engineering and computer sciences at the University of California, Berkeley, who led the development of the chip. “No other processor has the photonic I/O in the chip.” 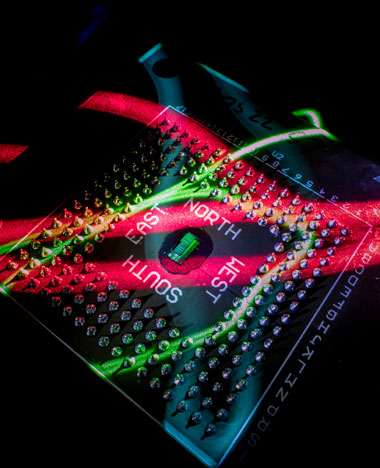 Stojanović and fellow UC Berkeley professor Krste Asanović teamed up with Rajeev Ram at the Massachusetts Institute of Technology and Miloš Popović at the University of Colorado Boulder to develop the new microprocessor.

“This is the first time we’ve put a system together at such scale, and have it actually do something useful, like run a program,” said Asanović, who helped develop the free and open architecture called RISC-V (reduced instruction set computer), used by the processor. 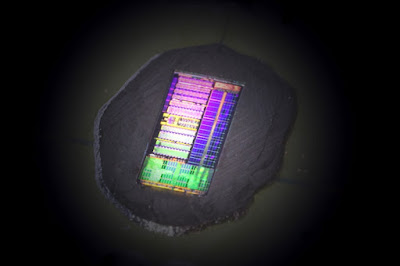 The illumination and camera create a rainbow-colored pattern across
the electronic-photonic processor chip.
(Image by Milos Popović, University of Colorado, milos.popovic@colorado.edu)