A quantum of light for material science 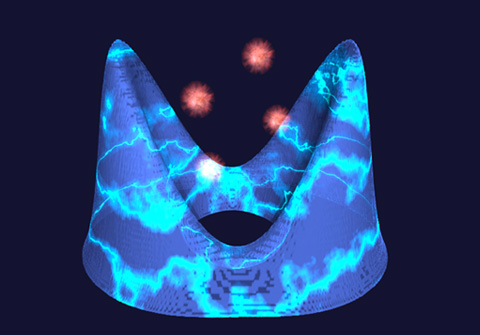 (December 23, 2015)  A study led by Ángel Rubio, the UPV/EHU-University of the Basque Country professor and head of the Max Planck Institute in Hamburg, shows that it is possible to predict the effects of photons on materials

Computer simulations that predict the light-induced change in the physical and chemical properties of complex systems, molecules, nanostructures and solids usually ignore the quantum nature of light. Scientists at the Max-Planck Institute for the Structure and Dynamics of Matter (MPSD), led by Professor Ángel Rubio of the UPV/EHU's Department of Material Physics and Director of the Theory Department at the MPSD, have now shown how the effects of the photons can be properly included in such calculations. This study opens up the possibility of predicting and controlling the change of material properties due to the interaction with photons from first principles.

The basic building blocks of atoms, molecules and solids are positively charged nuclei and negatively charged electrons. Their mutual interactions determine most of the physical and chemical properties of matter, such as electrical conductivity or the absorption of light. The laws that govern this delicate interplay between electrons and nuclei are those of quantum electrodynamics (QED), in which particles interact via the exchange of photons, which are the quanta of light. However, the equations of QED are so complex that in practice scientists have to simplify them to be able to make any prediction for real materials. A very common simplification in quantum chemistry and solid-state physics is to neglect the quantum nature of light. Although this assumption works well for many applications, recent experiments have uncovered situations where the quantum nature of the photons can dramatically change the material properties and give rise to new collective behaviour and phenomena.