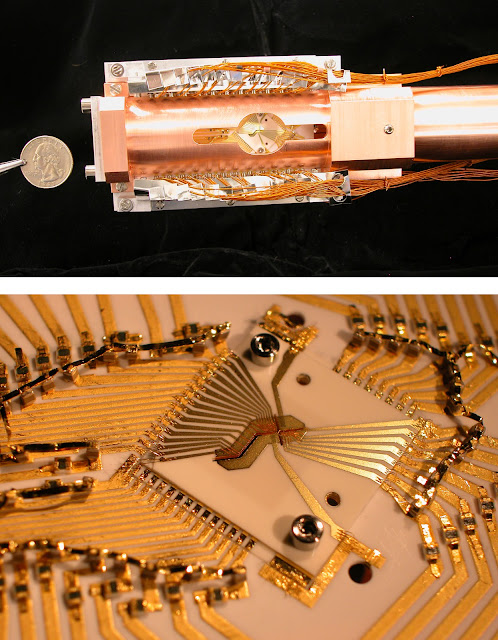 Ion trap used in NIST quantum computing experiments demonstrating logic operations
with two different types of ions (charged atoms). One magnesium ion and one beryllium
ion are trapped 4 micrometers apart near the cross-shaped opening at the center of both
photos. The larger-scale photo shows the gold-on-alumina trap inside a case that protects
against electrical interference. Credit: Blakestad/NIST

(December 16, 2015)  Physicists at the National Institute of Standards and Technology (NIST) have added to their collection of ingredients for future quantum computers by performing logic operations—basic computing steps—with two atoms of different elements. This hybrid design could be an advantage in large computers and networks based on quantum physics.

The NIST experiment, described in the Dec. 17, 2015, issue of Nature, manipulated one magnesium and one beryllium ion (charged atom) confined in a custom trap (see photo). The scientists used two sets of laser beams to entangle the two ions—establishing a special quantum link between their properties—and to perform two types of logic operations, a controlled NOT (CNOT) gate and a SWAP gate. The same issue of Nature describes similar work with two forms of calcium ions performed at the University of Oxford.
“Hybrid quantum computers allow the unique advantages of different types of quantum systems to be exploited together in a single platform,” said lead author Ting Rei Tan. “Many research groups are pursuing this general approach. Each ion species is unique, and certain ones are better suited for certain tasks such as memory storage, while others are more suited to provide interconnects for data transfer between remote systems.”

Gates are used to build circuits or programs. As in classical computing, a quantum bit (qubit) can have a value of 0 or 1. But unlike classical bits, a qubit can also be in a “superposition” of both 0 and 1 values at the same time. In the NIST experiment, the qubits are based on the ions’ spin directions (spin up is 1 and spin down is 0). A CNOT gate flips the second (target) qubit if the first (control) qubit is a 1; if it is a 0, the target bit is unchanged. If the control qubit is in a superposition, the ions become entangled. A SWAP gate interchanges the qubit states, including superpositions.