How nanoparticles give electrons away 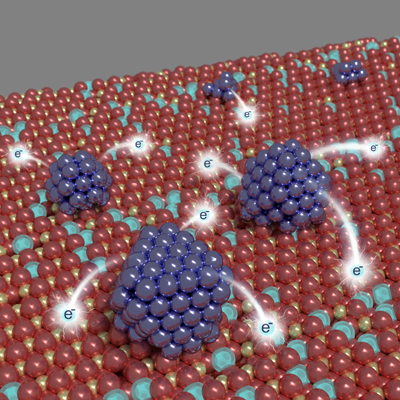 The research showed that the effect is most pronounced for small particles
with around 50 atoms. Image: designed by Sergey Kozlov and Oriol Lamiel.

(December 22, 2015)  Whether it is in catalytic processes, new types of solar cells or advanced electronic components, nanoparticles are everywhere in modern production and environmental technologies. Their unique properties ensure efficiency and save resources. Remarkable properties of nanoparticles often arise from chemical interactions with the support material on which they are placed. Such interactions change the electronic structure of the nanoparticle when electrical charge is exchanged between the particle and the support.

Research groups led by scientists from University of Barcelona, ICREA Professor Dr. Konstantin Neyman, and Friedrich-Alexander-Universität Erlangen-Nürnberg (Germany), Prof. Dr. Jörg Libuda, have now succeeded in quantifying the charge that is lost by a platinum nanoparticle when it is deposited onto a typical oxide support. Their work brings the possibility of designing nanoparticles with tailor-made properties a step closer.

In order to measure the electrical charge exchanged between metal particles and supports the international team of researchers from Germany, Spain, Italy and Czech Republic funded by the European Commission prepared a clean, atomically well-defined oxide surface, on which platinum nanoparticles have been placed. Using a highly sensitive detection method at Elettra Sincrotrone Trieste the researchers were able to quantify the effect for the first time. Studying particles with various numbers of atoms, from dozens to several hundreds, they measured the number of electrons transferred and showed that the effect is most pronounced for small particles with around 50 atoms.