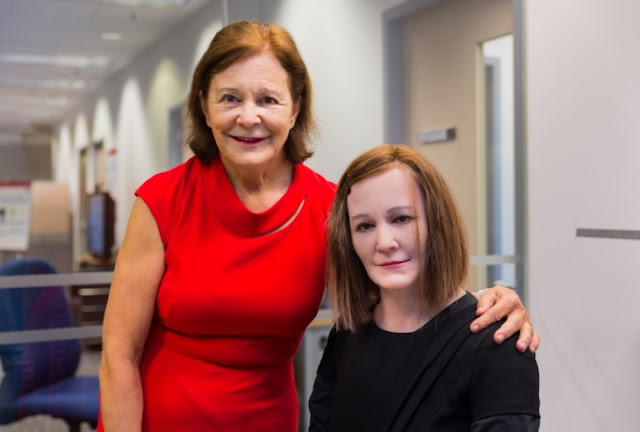 (December 29, 2015)  Say hello to Nadine, a “receptionist” at Nanyang Technological University (NTU Singapore). She is friendly, and will greet you back. Next time you meet her, she will remember your name and your previous conversation with her.

She looks almost like a human being, with soft skin and flowing brunette hair. She smiles when greeting you, looks at you in the eye when talking, and can also shake hands with you. And she is a humanoid.

Unlike conventional robots, Nadine has her own personality, mood and emotions. She can be happy or sad, depending on the conversation. She also has a good memory, and can recognise the people she has met, and remembers what the person had said before.

Nadine is the latest social robot developed by scientists at NTU. The doppelganger of its creator, Prof Nadia Thalmann, Nadine is powered by intelligent software similar to Apple’s Siri or Microsoft’s Cortana. Nadine can be a personal assistant in offices and homes in future. And she can be used as social companions for the young and the elderly.

A humanoid like Nadine is just one of the interfaces where the technology can be applied. It can also be made virtual and appear on a TV or computer screen, and become a low-cost virtual social companion.

With further progress in robotics sparked by technological improvements in silicon chips, sensors and computation, physical social robots such as Nadine are poised to become more visible in offices and homes in future.

The rise of social robots

Prof Thalmann, the director of the Institute for Media Innovation who led the development of Nadine, said these social robots are among NTU’s many exciting new media innovations that companies can leverage for commercialisation.