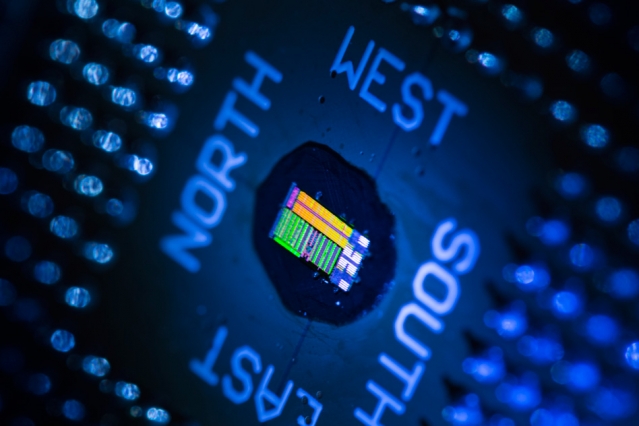 Researchers have produced a working optoelectronic chip that computes electronically
but uses light to move information. The chip has 850 optical components and 70 million
transistors, which, while significantly less than the billion-odd transistors of a typical
microprocessor, is enough to demonstrate all the functionality that a commercial optical
chip would require. Image: Glenn J. Asakawa

(December 23, 2015)  Using only processes found in existing microchip fabrication facilities, researchers at MIT, the University of California at Berkeley, and the University of Colorado have produced a working optoelectronic microprocessor, which computes electronically but uses light to move information.

Optical communication could dramatically reduce chips’ power consumption, which is not only desirable in its own right but essential to maintaining the steady increases in computing power that we’ve come to expect.

Demonstrating that optical chips can be built with no alteration to existing semiconductor manufacturing processes should make optical communication more attractive to the computer industry. But it also makes an already daunting engineering challenge even more difficult.

“You have to use new physics and new designs to figure out how you take ingredients and process recipes that are used to make transistors, and use those to make photodetectors, light modulators, waveguides, optical filters, and optical interfaces,” says MIT professor of electrical engineering Rajeev Ram, referring to the optical components necessary to encode data onto different wavelengths of light, transmit it across a chip, and then decode it. “How do you build all the optics using only the layers out of a transistor? It felt a bit like an episode of ‘MacGyver’ where he has to build an optical network using only old computer parts.”

The project began as a collaboration between Ram, Vladimir Stojanović, and Krste Asanovic, who were then on the MIT Department of Electrical Engineering and Computer Science faculty. Stojanović and Asanovic have since moved to Berkeley, and they, Ram, and Miloš A. Popović, who was a graduate student and postdoc at MIT before becoming an assistant professor of electrical engineering at Colorado, are the senior authors on a paper in Nature that describes the new chip.