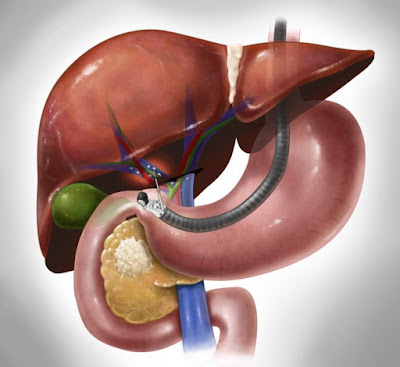 UChicago researchers developed a method to give earlier diagnoses of pancreatic cancer
by collecting samples of circulating tumor cells from the portal vein, which carries blood
from the gastrointestinal tract to the liver.
Courtesy of The University of Chicago Medicine & Biological Sciences
(December 13, 2015)  University of Chicago researchers have developed a method to diagnose pancreatic cancer earlier in patients. By collecting samples from the portal vein—which carries blood from the gastrointestinal tract, including from the pancreas, to the liver—physicians can learn far more about a patient’s pancreatic cancer than by relying on peripheral blood from a more easily accessed vein in the arm.

Primary tumors shed cancerous cells, known as circulating tumor cells, or CTCs, into the blood. These have been widely studied as prognostic biomarkers for various cancers. Because these cells are often larger, irregularly shaped and tend to cluster together, they get trapped in smaller vessels.
The authors hypothesized that most cells released from a gastrointestinal tumor would flow into the portal vein and then get sequestered by the narrow vessels in the liver. These cells would not reach the peripheral venous system. CTCs from gastrointestinal tumors are rarely identified in the peripheral blood until the cancer is widely metastatic.

To test this theory, UChicago researchers used an ultrasound-guided endoscope and a small needle to take blood from the portal vein during routine diagnostic endoscopies. They found CTCs in 100 percent of 18 patients with suspected tumors in the pancreas and bile ducts. Tests using peripheral blood samples, the standard method, detected tumors cells in only four of the 18 patients.