With a light meter and an app on his smartphone, researcher Jijo Vallooran is
measuring the intensity of the birefringence signal of a sample.
(Image: Laboratory Prof. R. Mezzenga / ETH Zurich)

(December 13, 2015)  ETH researchers led by Raffaele Mezzenga have developed a new diagnostic method. It is based on Birefringence, the ability of substances to change the polarisation state of light. With this method, doctors around the world can easily, rapidly and reliably detect malaria, Ebola or HIV to name only a few.

Nothing could be simpler: a drop of blood is placed on a special carrier substance; after a wait of a few minutes, the slide is placed on a device that emits polarised light thanks to an inexpensive polarisation filter. It is covered with a lid containing a second polarisation filter, which blocks the light from all materials except crystalline or materials with directional properties. If light is visible through the cross-polariser filter, a positive diagnosis is made. Through this an immediate ‘yes or no’ screening is possible. It is also possible to measure the light intensity, and thus the amount of the pathogen, through a simple light meter plugged into a smartphone and controlled via an app.

What sounds almost like science fiction has now become reality. The research group led by Raffaele Mezzenga, Professor of Food and Soft Materials, has recently published a scientific paper in which it introduces a new rapid test that can detect not only malaria parasites but also viruses such as HIV or Ebola, diverse bacteria or biomarkers, like glucose or cholesterol. 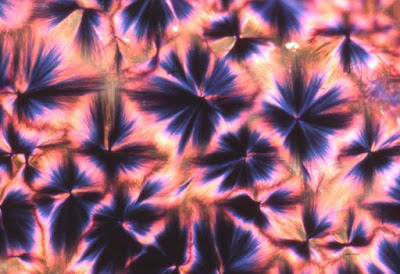 The detection methods are not only extremely fast; they are also considerably less expensive when compared with other detection methods. The polarisation device costs just CHF 20, says Jijo Vallooran, first author of the paper, which has just been published in the journal Advanced Functional Materials.

Although the concept behind this new technology is very general and appears so easy to operate, the scientific basis underlying the invention of the ETH researchers is extremely complex.

The scientists use the phenomenon of birefringence of polarised light from the lipid based lyotropic liquid crystals, which consist of self-assembled structures of fat molecules in water. The group of Prof. Mezzenga has been working with these liquid crystals for long time and exploits them also for other applications, such as drug delivery and protein crystallisation. 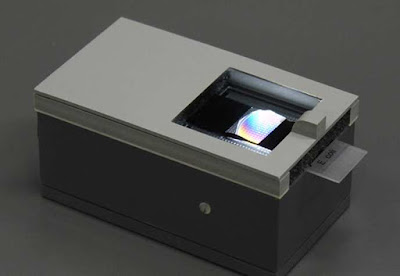 Lyotropic liquid crystals organise themselves into special networks with unique symmetry, which means that their basic motif repeats itself periodically. In the case of liquid crystal cubic phases, the channels are made of lipid bilayer membranes in water and have a diameter of just a few nanometres, so only few free water molecules are available in the liquid crystal, whereas the majority is bound to the channel walls. These liquid crystal cubic phases are isotropic, or so to say, do not have any birefringent properties, which means that if a slide with a layer of lyotropic liquid crystal films is placed under a light source that allows polarised light to pass through, it appears black when observed through another polarizer tilted at 90°.