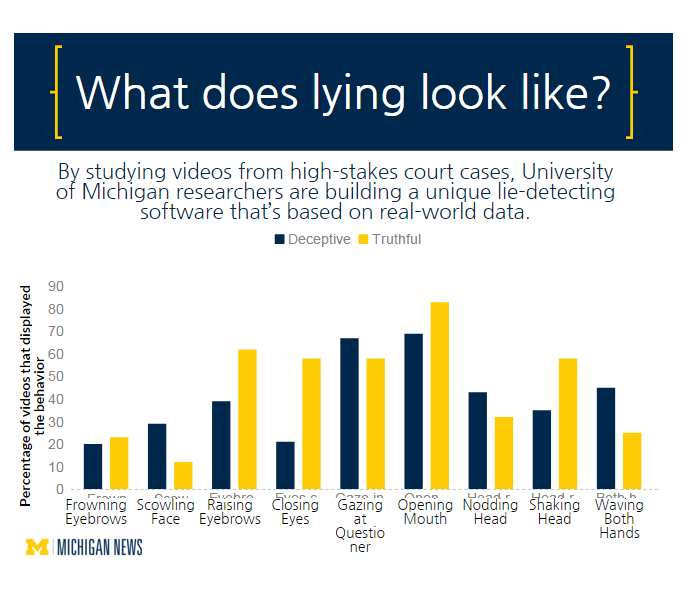 Their prototype considers both the speaker's words and gestures, and unlike a polygraph, it doesn't need to touch the subject in order to work. In experiments, it was up to 75 percent accurate in identifying who was being deceptive (as defined by trial outcomes), compared with humans' scores of just above 50 percent.

With the software, the researchers say they've identified several tells. Lying individuals moved their hands more. They tried to sound more certain. And, somewhat counterintuitively, they looked their questioners in the eye a bit more often than those presumed to be telling the truth, among other behaviors.

The system might one day be a helpful tool for security agents, juries and even mental health professionals, the researchers say.

To develop the software, the team used machine-learning techniques to train it on a set of 120 video clips from media coverage of actual trials. They got some of their clips from the website of The Innocence Project, a national organization that works to exonerate the wrongfully convicted.

The "real world" aspect of the work is one of the main ways it's different.

"In laboratory experiments, it's difficult to create a setting that motivates people to truly lie. The stakes are not high enough," said Rada Mihalcea, professor of computer science and engineering who leads the project with Mihai Burzo, assistant professor of mechanical engineering at UM-Flint. "We can offer a reward if people can lie well—pay them to convince another person that something false is true. But in the real world there is true motivation to deceive."