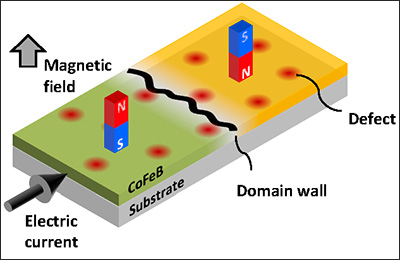 Schematic of domain wall creep. When a very weak magnetic field or electric
current is applied to the magnetic wire with domain wall, the domain wall
behaves as an elastic interface and slowly moves, creeps.

The research group of Professor Hideo Ohno and Associate Professor Shunsuke Fukami of Tohoku University has studied in detail, a slow change of microscopic magnetic structures in metallic wires induced by external driving forces, commonly called "creep" motion. This has allowed them to clarify the physics of how the driving forces, magnetic fields or electric currents, act on the magnetic structure.

Previous studies had shown that while the actions of magnetic fields and currents are the same for metallic materials, they are fundamentally different for semiconductor materials.

The present study reveals that in cases where the sample satisfies a certain condition, the current acts on the magnetic structure in a different manner from the magnetic field case, irrespective of the intricacies of the material. 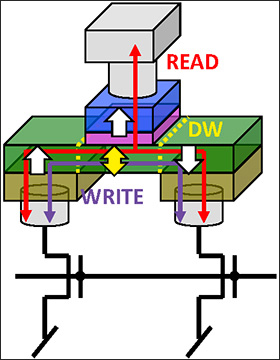 Schematic of a three-terminal memory device with current-induced
domain wall motion. To write the information, current is applied to
magnetic wire having domain wall (DW) to drag it.

The development of a high-performance magnetic memory device (where the magnetic structure is manipulated by current) has been intensively pursued recently, and the present findings are expected to facilitate the fundamental understanding to achieve the practical application.