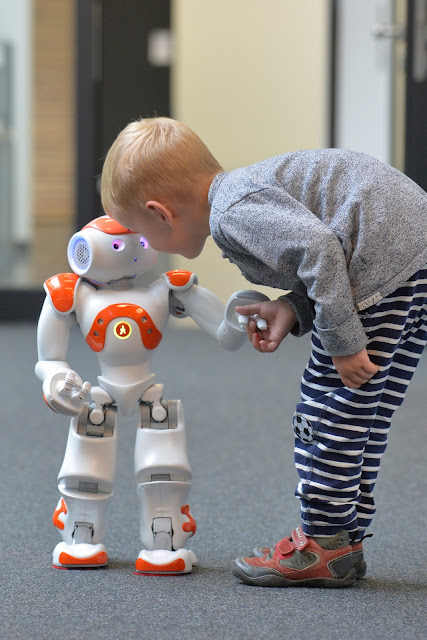 In a new EU project, Bielefeld researchers are investigating how the robot Nao
can help children learn a language. Photo: CITEC/Bielefeld University.

(December 22, 2015) Researchers at Bielefeld University plan to use the humanoid robot ‘Nao’ for language training

According to the Federal Statistical Office, one-third of children under the age of five in Germany come from immigrant families. Could technical assistants be used to help prepare immigrant children for school and teach them the new language? L2TOR, the new project financed by the European Union, is researching that very question. The project will launch in January 2016 and will run for three years. One research group at the Cluster of Excellence Cognitive Interaction Technology (CITEC) of Bielefeld University wants to provide tutoring systems with Tablet-PCs and robots that can assist in language learning. To do this, researchers are developing modules that recognize a child’s language abilities and motivation so that the robot can react individually to each child.

Computer scientists, educators, and linguists are working together on this project in a consortium of five universities and two companies. Plymouth University in Great Britain is coordinating the research. The abbreviation L2TOR (pronounced ‘el tutor’) stands for ‘Second Language Tutoring Using Social Robots.’ “We are investigating how interactive robots can be used to help teach children between the ages of 4 to 6 a second language,” says Professor Dr. Stefan Kopp, who heads the research group Social Cognitive Systems, which belongs to the Faculty of Technology and is part of CITEC. “We are working to provide children with the language abilities that they need for school.”