(December 18, 2015)  Researchers from the RIKEN Center for Developmental Biology, working with colleagues from the Tokyo Medical and Dental University, have found a way to—literally—multiply teeth. In mice, they were able to extract teeth germs—groups of cells formed early in life that later develop into teeth, split them into two, and then implant the teeth into the mice’s jaws, where they developed into two fully functional teeth.

Teeth are a major target of regenerative medicine. According to Takashi Tsuji, the leader of the team, approximately 10 percent of people are born with some missing teeth, and in addition, virtually all people lose some teeth to either accidents or disease as they age. Remedies such as implants and bridges are available, but they do not restore the full functionality of the teeth. Growing new teeth would be beneficial, but unfortunately humans only develop a limited number of teeth germs—the rudimentary cell groups from which teeth grow. 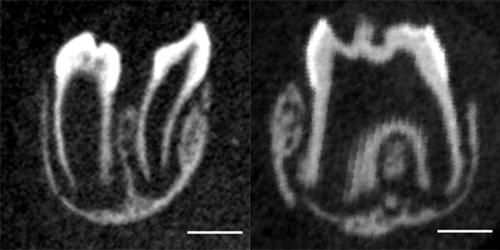 “We wondered,” says Tsuji, “about whether we might be able to make more teeth from a single germ.” To demonstrate that it might be feasible, the group focused on the fact that teeth development takes place through a wavelike pattern of gene expression involving Lef1, an activator, and Ectodin, an inhibitor. To manipulate the process, they removed teeth germs from mice and grew them in culture. At an appropriate point in the development process, which turned out from their experiments to be 14.5 days, they nearly sliced the germs into two with nylon thread, leaving just a small portion attached, and continued to culture them. The hope was that signaling centers—which control the wave of molecules that regulate the development of the tooth—would arise in each part, and indeed this turned out to be true. The ligated germs developed naturally into two teeth, which the team transplanted into holes drilled into the jaws of the mice. The teeth ended up being fully functional, allowing the mice to chew and feel stimulus, though they were only half the size of normal teeth, with half the number of crowns—a result that could be expected given that the researchers were using already developed germs.

Significantly, they were able to manipulate the teeth using orthodontic methods, equivalent to braces, and the bone properly remodeled to accommodate the movement of the teeth. 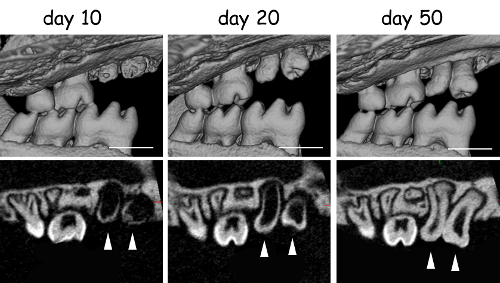 Looking to the future, Tsuji says, “Our method could be used for pediatric patients who have not properly developed teeth as a result of conditions such as cleft lip or Down syndrome, since the germs of permanent teeth or wisdom teeth could be split and implanted. In the future, we could also consider using stem cells to grow more germs, but today there are barriers to culturing such cells, which will need to be overcome.”