A brain link to autism 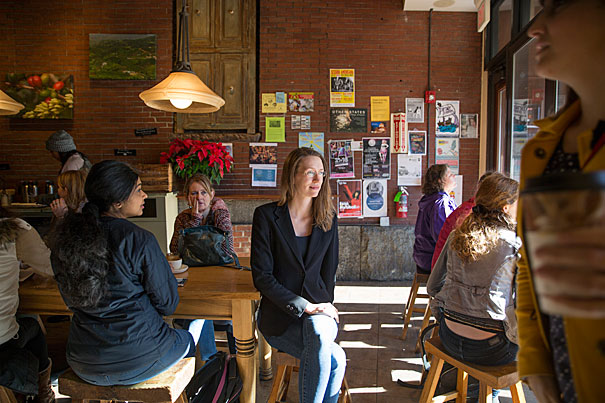 Rose Lincoln/Harvard Staff Photographer
“This is the first time, in humans, that a neurotransmitter in the brain has been linked to autistic
behavior — full stop,” said Caroline Robertson, a junior fellow of the Harvard Society of Fellows.

(December 17, 2015)  Scientists find neurotransmitter that ties in with disorder’s behavior.

In a discovery that could offer valuable insights into understanding, diagnosing, and even treating autism, Harvard scientists for the first time have linked a specific neurotransmitter in the brain with autistic behavior.

Using a visual test that prompts different reactions in autistic and normal brains, a research team led by Caroline Robertson, a junior fellow of the Harvard Society of Fellows, was able to show that those differences were associated with a breakdown in the signaling pathway used by GABA, one of the brain’s chief inhibitory neurotransmitters. The study is described in a Dec. 17 paper in the journal Current Biology.

“This is the first time, in humans, that a neurotransmitter in the brain has been linked to autistic behavior — full stop,” Robertson said. “This theory that the GABA signaling pathway plays a role in autism has been shown in animal models, but until now we never had evidence for it actually causing autistic differences in humans.”

Though it may not lead directly to autism treatments, Robertson said the finding offers invaluable insight into the disorder and the role that neurotransmitters such as GABA may play in it. The discovery also suggests that similar visual tests could be used to screen younger children for autism, allowing parents and clinicians to intervene sooner.

Though long believed to play a role in autism — GABA has been widely studied in animal models — evidence supporting GABA’s role in the disorder in humans has been elusive.

“Autism is often described as a disorder in which all the sensory input comes flooding in at once. So the idea that an inhibitory neurotransmitter was important fit with the clinical observations,” Robertson said. “In addition, people with autism often have seizures — there is a 20 to 25 percent comorbidity between autism and epilepsy — and we think seizures are runaway excitation in the brain.”