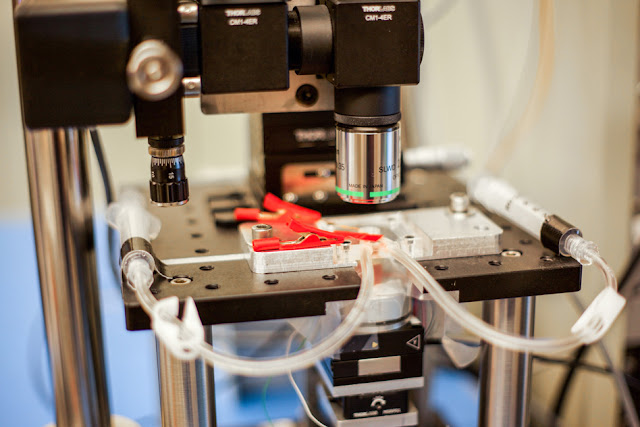 A new high-speed microscope produces images of chemical processes taking place at the
nanoscale, at a rate that is close to real-time video. This closeup shot of the microscope
shows transparent tubes used to inject various liquids into the imaging environment.
This liquid can be water, acid, buffer solution for live bacteria, cells, or electrolytes in an
electrochemical process. Researchers use one as an inlet and the other as an outlet to
circulate and refresh the solutions throughout an experiment.

State-of-the-art atomic force microscopes (AFMs) are designed to capture images of structures as small as a fraction of a nanometer — a million times smaller than the width of a human hair. In recent years, AFMs have produced desktop-worthy close-ups of atom-sized structures, from single strands of DNA to individual hydrogen bonds between molecules.

But scanning these images is a meticulous, time-consuming process. AFMs therefore have been used mostly to image static samples, as they are too slow to capture active, changing environments.

Now engineers at MIT have designed an atomic force microscope that scans images 2,000 times faster than existing commercial models. With this new high-speed instrument, the team produced images of chemical processes taking place at the nanoscale, at a rate that is close to real-time video. 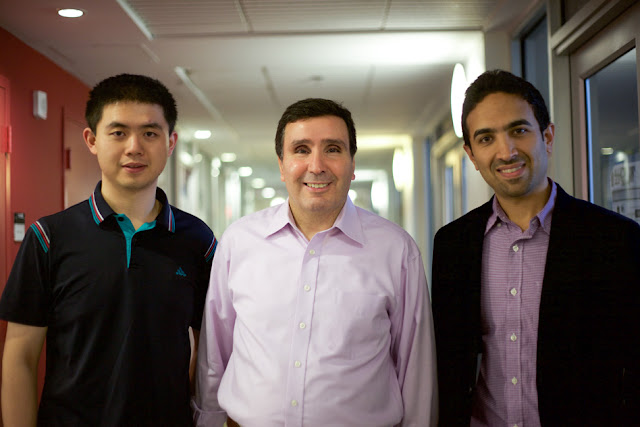 (Left to right) Fangzhou Xia, a new lab member who was not involved in the study;
professor Kamal Youcef-Toumi; and postdoc Iman Soltani Bozchalooi.

In one demonstration of the instrument’s capabilities, the researchers scanned a 70- by-70-micron sample of calcite as it was first immersed in deionized water and later exposed to sulfuric acid. The team observed the acid eating away at the calcite, expanding existing nanometer-sized pits in the material that quickly merged and led to a layer-by-layer removal of calcite along the material’s crystal pattern, over a period of several seconds.

Kamal Youcef-Toumi, a professor of mechanical engineering at MIT, says the instrument’s sensitivity and speed will enable scientists to watch atomic-sized processes play out as high-resolution “movies.” 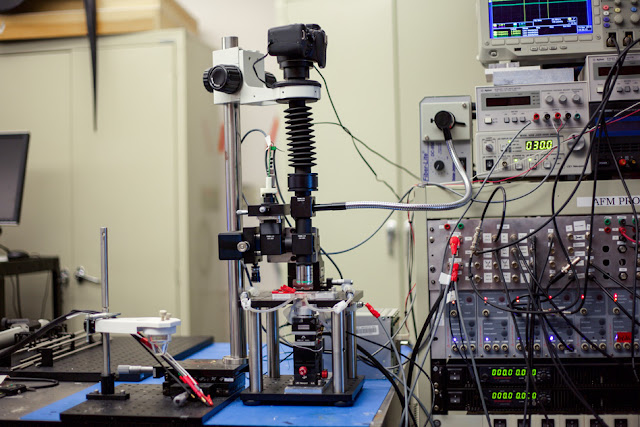 Bozchalooi came up with a design to enable high-speed scanning over both large and small
ranges. The main innovation centers on a multiactuated scanner: A sample platform incorporates
a smaller, speedier scanner as well as a larger, slower scanner for every direction,
which work together as one system to scan a wide 3-D region at high speed.

“People can see, for example, condensation, nucleation, dissolution, or deposition of material, and how these happen in real-time — things that people have never seen before,” Youcef-Toumi says. “This is fantastic to see these details emerging. And it will open great opportunities to explore all of this world that is at the nanoscale.”

The group’s design and images, which are based on the PhD work of Iman Soltani Bozchalooi, now a postdoc in the Department of Mechanical Engineering, are published in the journal Ultramicroscopy. 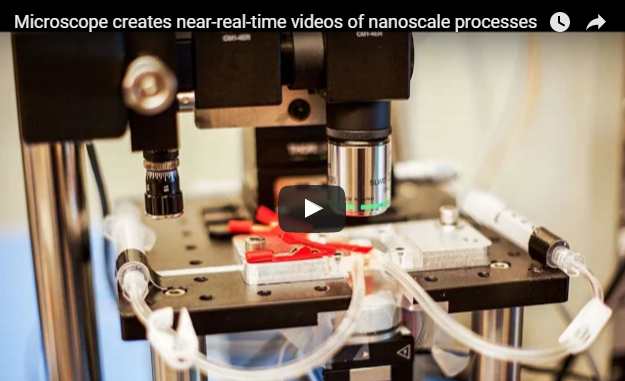 Watch and learn more about how the researchers were able to capture near real-time
video of chemical processes at the nanoscale.
Video: Melanie Gonick/MIT (AFM videos courtesy of the researchers)

Atomic force microscopes typically scan samples using an ultrafine probe, or needle, that skims along the surface of a sample, tracing its topography, similarly to how a blind person reads Braille. Samples sit on a movable platform, or scanner, that moves the sample laterally and vertically beneath the probe. Because AFMs scan incredibly small structures, the instruments have to work slowly, line by line, to avoid any sudden movements that could alter the sample or blur the image. Such conventional microscopes typically scan about one to two lines per second.

“If the sample is static, it’s ok to take eight to 10 minutes to get a picture,” Youcef-Toumi says. “But if it’s something that’s changing, then imagine if you start scanning from the top very slowly. By the time you get to the bottom, the sample has changed, and so the information in the image is not correct, since it has been stretched over time.”