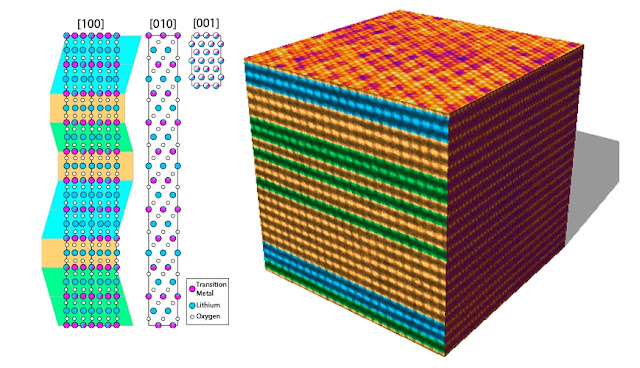 On the right the cube represents the structure of lithium- and manganese- rich transition
metal oxides. The models on the left show the structure from three different directions,
which correspond to the STEM images of the cube.

Using complementary microscopy and spectroscopy techniques, researchers at Lawrence Berkeley National Laboratory (Berkeley Lab) say they have solved the structure of lithium- and manganese-rich transition metal oxides, a potentially game-changing battery material and the subject of intense debate in the decade since it was discovered.

Researchers have been divided into three schools of thought on the material’s structure, but a team led by Alpesh Khushalchand Shukla and Colin Ophus spent nearly four years analyzing the material and concluded that the least popular theory is in fact the correct one. Their results were published online in the journal Nature Communications in a paper titled, “Unraveling structural ambiguities in lithium- and manganese- rich transition metal oxides.” Other co-authors were Berkeley Lab scientists Guoying Chen and Hugues Duncan and SuperSTEM scientists Quentin Ramasse and Fredrik Hage.

This material is important because the battery capacity can potentially be doubled compared to the most commonly used Li-ion batteries today due to the extra lithium in the structure. “However, it doesn’t come without problems, such as voltage fade, capacity fade, and DC resistance rise,” said Shukla. “It is immensely important that we clearly understand the bulk and surface structure of the pristine material. We can’t solve the problem unless we know the problem.” 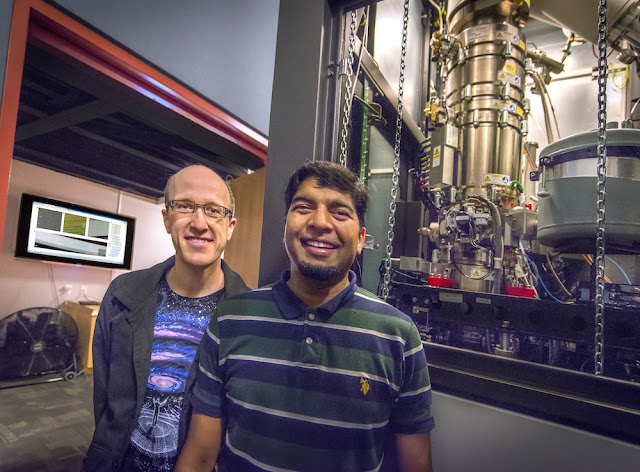 Colin Ophus (left) and Alpesh Khushalchand Shukla in front of the TEAM 0.5 microscope
at the Molecular Foundry. (Photo by Roy Kaltschmidt/Berkeley Lab)

A viable battery with a marked increase in storage capacity would not only shake up the cell phone and laptop markets, it would also transform the market for electric vehicles (EVs). “The problem with the current lithium-ion batteries found in laptops and EVs now is that they have been pushed almost as far as they can go,” said Ophus. “If we’re going to ever double capacity, we need new chemistries.”

Using state-of-the-art electron microscopy techniques at the National Center for Electron Microscopy (NCEM) at Berkeley Lab’s Molecular Foundry and at SuperSTEM in Daresbury, United Kingdom, the researchers imaged the material at atomic resolution. Because previous studies have been ambiguous about the structure, the researchers minimized ambiguity by looking at the material from different directions, or zone axes. “Misinterpretations from electron microscopy data are possible because individual two-dimensional projections do not give you the three-dimensional information needed to solve a structure,” Shukla said. “So you need to look at the sample in as many directions as you can.”