What Happens When Your Brain Can’t Tell Which Way is Up? 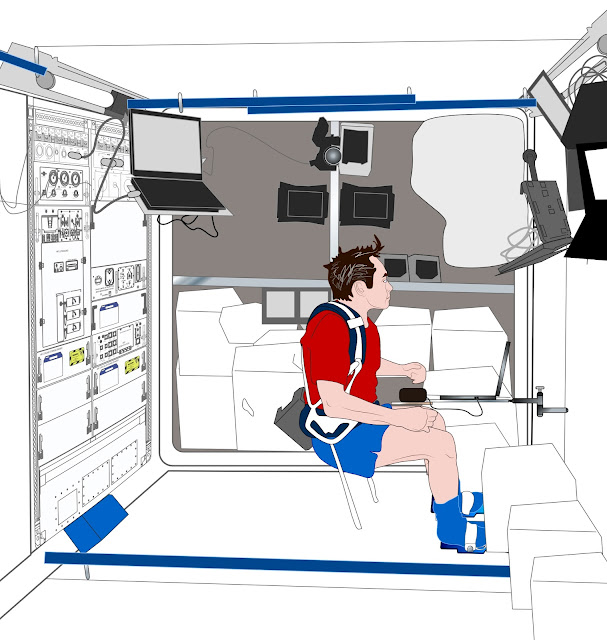 This illustration shows the configuration for conducting neurocognitive assessments for the
Neuromapping study aboard the International Space Station. Credits: NASA

(October 10, 2015)  In space, there is no “up” or “down.” That can mess with the human brain and affect the way people move and think in space. An investigation on the International Space Station seeks to understand how the brain changes in space and ways to deal with those changes.

Previous research and first-hand reports suggest that humans have a harder time controlling physical movement and completing mental tasks in microgravity. Astronauts have experienced problems with balance and perceptual illusions – feeling as if, for example, they are switching back and forth between right-side-up and upside down.

The Spaceflight Effects on Neurocognitive Performance: Extent, Longevity, and Neural Bases (NeuroMapping) study is examining changes in both brain structure and function and determining how long it takes to recover after returning from space.

Researchers are using both behavioral assessments and brain imaging. Astronauts complete timed obstacle courses and tests of their spatial memory, or the ability to mentally picture and manipulate a three-dimensional shape, before and after spaceflight. The spatial memory test also is performed aboard the station, along with sensory motor adaptation tests and computerized exercises requiring them to move and think simultaneously. Astronauts are tested shortly after arriving aboard the station, mid-way through and near the end of a six-month flight.

Structural and functional magnetic resonance imaging (MRI) scans of the brain are done pre-flight and post-flight.

These slides show changes in volume in certain areas of the brain that occur with long-duration,
head-down tilt bed rest. The Neuromapping Flight Study examines whether similar changes occur
with spaceflight. Credits: University of Michigan

“We are looking at the volume of different structures in the brain and whether they change in size or shape during spaceflight,” said principal investigator Rachael D. Seidler, director of the University of Michigan’s Neuromotor Behavior Laboratory.

Functional MRIs involve astronauts completing a task during the imaging, which will show researchers which parts of the brain they rely on to do so.

According to Seidler, both the behavioral assessment and brain imaging are important to help identify the relationship between physical changes in the brain and those in behavior.

“On Earth, your vestibular - or balance - system tells you how your head moves relative to gravity, but in space, the gravity reference is gone,” Seidler said. “That causes these perceptual illusions, as well as difficulty coordinating movement of the eyes and head.”