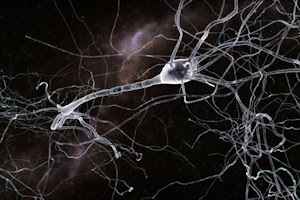 (October 23, 2015)  Scientists at The University of Manchester have shown for the first time that the numbers of opiate receptors in the brain increases to combat severe pain in arthritis sufferers.

Chronic pain – pain which lasts for more than six months – is a real problem for many people with approximately 46% of the UK population estimated to suffer from it (comprising 20% of consultations in general practice).   However, some people seem to cope better than others with pain, and knowing more about how these coping mechanisms work might help to develop new ways of treating this distressing symptom.
It has been known for a long time that we have receptors in our brains that respond to natural painkilling opiates such as endorphins, but the researchers in Manchester have now shown that these receptors increase in number to help cope with long-term, severe pain.

By applying heat to the skin using a laser stimulator, Dr Christopher Brown and his colleagues showed that the more opiate receptors there are in the brain, the higher the ability to withstand the pain.
The study used Positron Emission Tomography (PET) imaging on 17 patients with arthritis and nine healthy controls to show the spread of the opioid receptors.
This suggests that the increase in opiate receptors in the brain is an adaptive response to chronic pain, allowing people to deal with it more easily.

Dr Brown said: “As far as we are aware, this is the first time that these changes have been associated with increased resilience to pain and shown to be adaptive.

“Although the mechanisms of these adaptive changes are unknown, if we can understand how we can enhance them, we may find ways of naturally increasing resilience to pain without the side effects associated with many pain killing drugs.”