To infinity and beyond 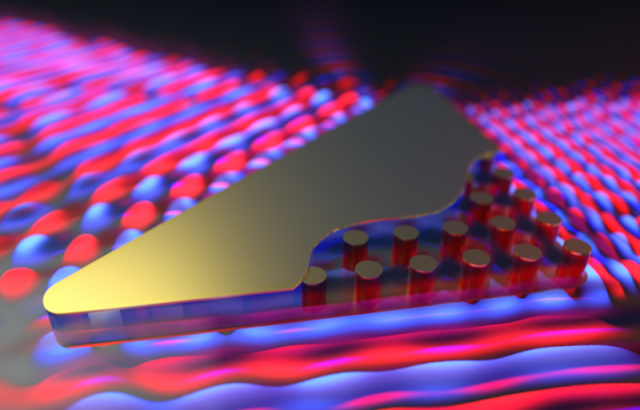 New zero-index material made of silicon pillar arrays embedded in a polymer matrix
and clad in gold film creates a constant phase of light, which stretches out in infinitely
long wavelengths. (Illustration by Credit: Peter Allen/Harvard SEAS)

(October 20, 2015)  Electrons are so 20th century. In the 21st century, photonic devices, which use light to transport large amounts of information quickly, will enhance or even replace the electronic devices that are ubiquitous in our lives today. But there’s a step needed before optical connections can be integrated into telecommunications systems and computers: researchers need to make it easier to manipulate light at the nanoscale.

Researchers at the Harvard John A. Paulson School of Engineering and Applied Sciences (SEAS) have done just that, designing the first on-chip metamaterial with a refractive index of zero, meaning that the phase of light can travel infinitely fast.

“Light doesn’t typically like to be squeezed or manipulated but this metamaterial permits you to manipulate light from one chip to another, to squeeze, bend, twist and reduce diameter of a beam from the macroscale to the nanoscale,” said Mazur. “It’s a remarkable new way to manipulate light.”

Although this infinitely high velocity sounds like it breaks the rule of relativity, it doesn’t. Nothing in the universe travels faster than light carrying information — Einstein is still right about that. But light has another speed, measured by how fast the crests of a wavelength move, known as phase velocity. This speed of light increases or decreases depending on the material it’s moving through.