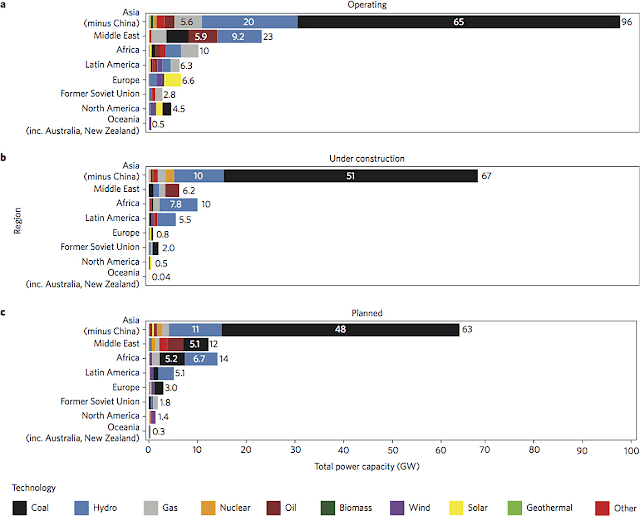 When global leaders converge on Paris Nov. 30 for the 2015 United Nations climate change
conference, they should create guidelines and incentives for developing nations to cooperate
with one another on lower-carbon energy projects, according to a report led by Princeton University
researchers. Chinese firms in particular have recently accelerated the growth of coal power in
developing nations, particularly in Asia, the researchers found. They conducted the first tally of
power plants around the world involving Chinese companies. The graph above shows power plant
capacity built with China-based firms (bottom axis), measured in gigawatts (GW), per global region
(left axis). The colored bars correspond with a particular energy source with black representing
coal. The researchers found that among the power capacities in Asian countries other than
China that involve Chinese firms, 68 percent in operation (a), 77 percent under construction (b),
and 76 percent in planning (c) burn coal. (Image courtesy of Nature Climate Change; Hannam et al.)

(October 28, 2015)  The paper, which includes the first tally of Chinese involvement in power plants around the world, includes co-authors Michael Oppenheimer, the Albert G. Milbank Professor of Geosciences and International Affairs at Princeton; Zhenliang Liao, an associate professor of environmental science and engineering at Tongji University; and Steven Davis, an assistant professor of earth system science at UC-Irvine.

Chinese firms — which often have financial or policy backing from China's state banks — have poured coal-power equipment into other Asian countries, partly as a result of China's slowing domestic power-market growth. The situation could get worse as China pledges to reduce domestic carbon emissions, according to the paper. The researchers found that of the total power capacities in Asian countries other than China that have involvement from Chinese firms, 68 percent in operation, 77 percent under construction and 76 percent in planning burn coal. This level of involvement in coal exceeds the global trend, Hannam said.