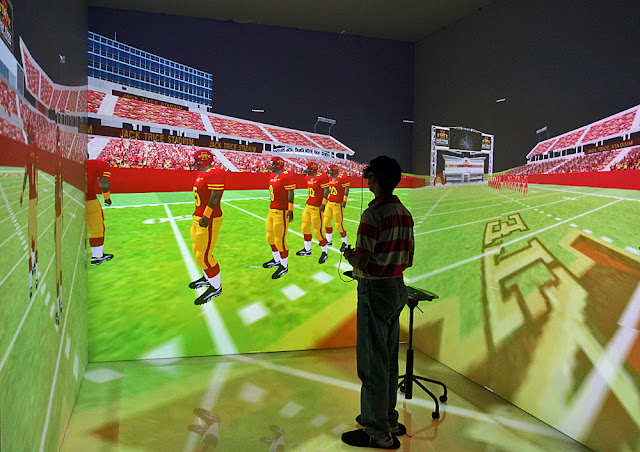 (October 17, 2015)  There you were, inside the C6 virtual reality room at Iowa State University, surrounded on six sides by 100 million pixels and completely immersed in the sights and sounds of game day at Jack Trice Stadium.

The band marched in I-S-U formation. The cheerleaders did flips. You turned around and took a look at the new stands and the Sukup End Zone Club. The “Cyclone Weather Alert” played on the big video boards. Then the visiting team entered the stadium to boos from the full-house crowd.

The Cyclones kicked off, forced a fumble and recovered the ball. After a quick touchdown, the Cyclones celebrated in the end zone and, when you looked up, fireworks exploded over the stadium.

Sounds cool, right? And fun, sort of like being inside a video game. 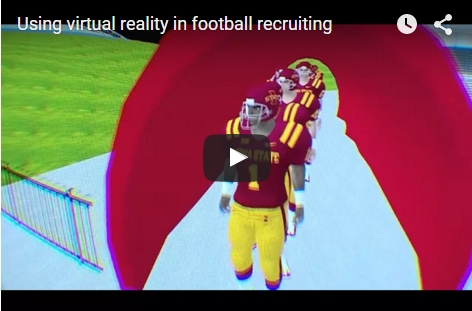 Chernoff is in charge of the team’s recruiting department and part of his job is to find new and better ways to recruit student-athletes to Iowa State. The best way is to bring them to campus for a game-day visit, but there are only six home games a year and expenses-paid, official visits are restricted to high school seniors.

But the team talks to younger players. The recruiting season also extends well beyond the football season. And Iowa State’s recruiting territory includes football hotbeds such as Florida, Texas and California. How could the team provide a game-day experience to off-season visitors and maybe even out-of-state prospects?