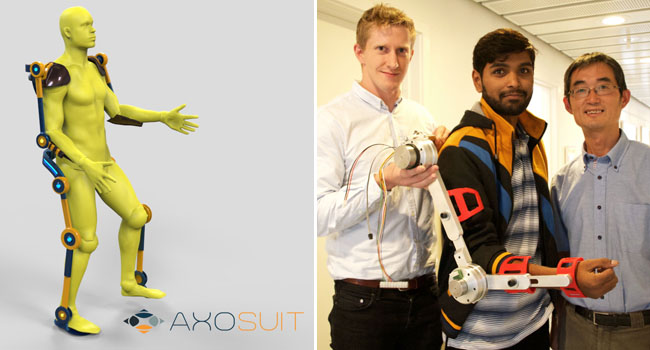 (October 15, 2015)  Researchers from Aalborg University are involved in an international project to develop portable robot skeletons for the elderly so they can continue to be active longer. Think of it as a tool, not as a robot, says researcher.

The world's population is aging. According to the World Health Organization (WHO), in 2050 there will be more than two billion people over age 60. And the older we get, the weaker our bodies become. So an international team of researchers and companies are working to develop an exoskeleton for senior citizens so they can remain active for longer.

- Many older people are mentally fit and want to continue to be active, but their physical abilities are steadily deteriorating, explains Shaoping Bai, Associate Professor at the Department of Mechanical and Manufacturing Engineering at Aalborg University. This is an attempt to complement the strengths of older people so they can continue to be mobile and live independently for a longer time.

PUT THE SKELETON ON

In popular terms, an exoskeleton is a kind of light-weight robot skeleton with small electric motors that can be mounted on the body. This gives the body support while the motors provide extra strength to perform different types of movements. It’s a bit like being on a battery-powered electric bicycle where the motor assistance depends on how strongly you step on the pedals. 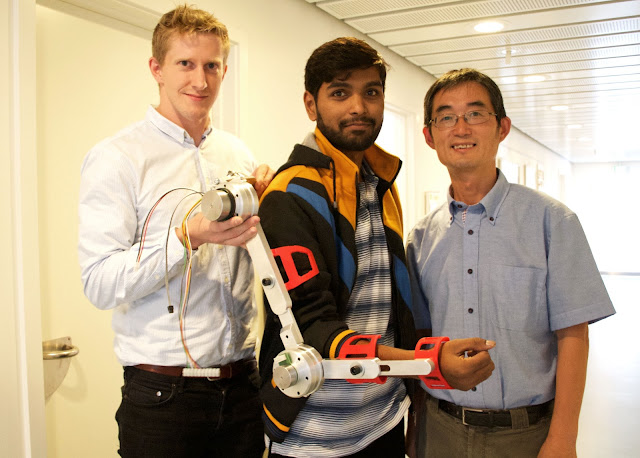 Exoskeletons will ensure that the elderly can remain active and mobile in the future.
Simon Christensen (left), Muhammad Raza Ul Islam and Shaoping Bai (right)
with the first model of a portable robotic arm. Photo: Jakob Brodersen.

Using a variety of advanced sensors the exoskeleton detects things like whether you want to lift your arm or stretch your elbow, and activates small motors that function somewhat like power steering in a car; the movements will be easier and you don't need to put a lot of effort into them.

Exoskeletons exist to some extent today as medical devices for people who have lost the use of their limbs. For example, the opening game at the World Cup in Brazil last year was officially kicked off by a 29-year-old man who was paralyzed from the waist down. Standing on the sideline wearing an exoskeleton, he was able to kick the ball to the referee to start the match.