Femto-Photography: Visualizing Photons in Motion at a Trillion Frames Per Second 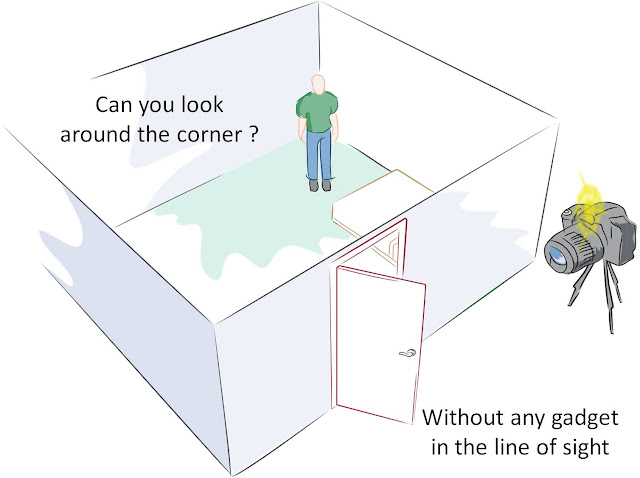 We have built an imaging solution that allows us to visualize propagation of light. The effective exposure time of each frame is two trillionths of a second and the resultant visualization depicts the movement of light at roughly half a trillion frames per second. Direct recording of reflected or scattered light at such a frame rate with sufficient brightness is nearly impossible. We use an indirect 'stroboscopic' method that records millions of repeated measurements by careful scanning in time and viewpoints. Then we rearrange the data to create a 'movie' of a nanosecond long event.

The device has been developed by the MIT Media Lab’s Camera Culture group in collaboration with Bawendi Lab in the Department of Chemistry at MIT. A laser pulse that lasts less than one trillionth of a second is used as a flash and the light returning from the scene is collected by a camera at a rate equivalent to roughly half a trillion frames per second. However, due to very short exposure times (roughly two trillionth of a second) and a narrow field of view of the camera, the video is captured over several minutes by repeated and periodic sampling.

The new technique, which we call Femto Photography, consists of femtosecond laser illumination, picosecond-accurate detectors and mathematical reconstruction techniques. Our light source is a Titanium Sapphire laser that emits pulses at regular intervals every ~13 nanoseconds. These pulses illuminate the scene, and also trigger our picosecond accurate streak tube which captures the light returned from the scene. The streak camera has a reasonable field of view in horizontal direction but very narrow (roughly equivalent to one scan line) in vertical dimension. At every recording, we can only record a '1D movie' of this narrow field of view. In the movie, we record roughly 480 frames  and each frame has a roughly 1.71 picosecond exposure time. Through a system of mirrors, we orient the view of the camera towards different parts of the object and capture a movie for each view. We maintain a fixed delay between the laser pulse and our movie starttime. Finally, our algorithm uses this captured data to compose a single 2D movie of roughly 480 frames each with an effective exposure time of 1.71 picoseconds.