This optical image shows a cell (in blue) with the ATCV-1 viral particles (pink dots).

(October 22, 2015)  New research led by the University of Nebraska-Lincoln has provided the first direct evidence that an algae-infecting virus can invade and potentially replicate within some mammalian cells.

Known as Acanthocystis turfacea chlorella virus 1, or ATCV-1, the pathogen is among a class of chloroviruses long believed to take up residence only in green algae. That thinking changed with a 2014 study from Johns Hopkins University and UNL that found gene sequences resembling those of ATCV-1 in throat swabs of human participants.

The new study, published in the Journal of Virology, introduced ATCV-1 to macrophage cells that serve critical functions in the immune responses of mice, humans and other mammals. By tagging the virus with fluorescent dye and assembling three-dimensional images of mouse cells, the authors determined that ATCV-1 successfully infiltrated them. 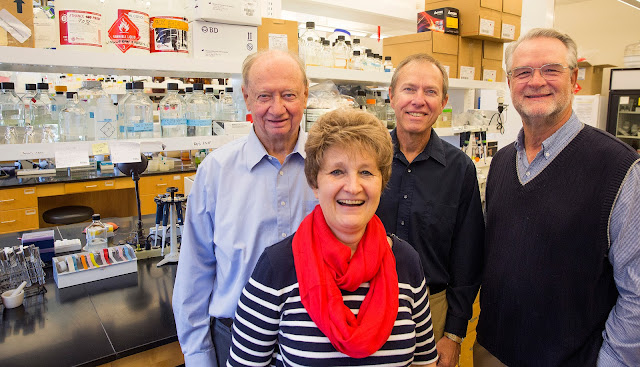 The authors also measured a three-fold increase in ATCV-1 within 24 hours of introducing the virus. The relatively modest spike nevertheless suggests that ATCV-1 can replicate within the macrophage cells, according to co-author David Dunigan.

Though a few studies have documented viruses jumping from one biological kingdom to another, chloroviruses were previously thought to have a limited "host range" that stopped well short of the animal kingdom, Dunigan said.

"A few years ago, no one I know would have made a prediction like this," said Dunigan, research professor of plant pathology and member of the Nebraska Center for Virology. "You probably would've been laughed out of the room. But we are now in the middle of something that is so very interesting."