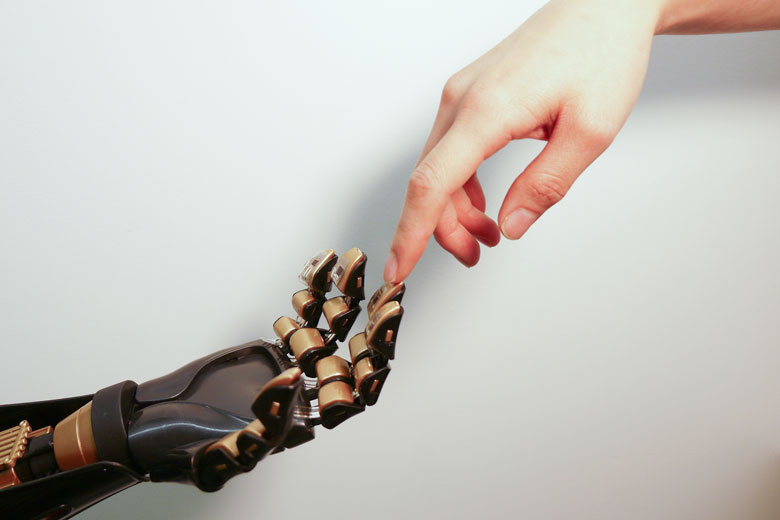 Stanford chemical engineering Professor Zhenan Bao and her team have created
a skin-like material that can tell the difference between a soft touch and a firm handshake.
The device on the golden “fingertip” is the skin-like sensor developed
by Stanford engineers. (Bao Lab)

(October 15, 2015)  Stanford engineers have created a plastic skin-like material that can detect pressure and deliver a Morse code-like signal directly to a living brain cell. The work takes a big step toward adding a sense of touch to prosthetic limbs.

Stanford engineers have created a plastic "skin" that can detect how hard it is being pressed and generate an electric signal to deliver this sensory input directly to a living brain cell.

Zhenan Bao, a professor of chemical engineering at Stanford, has spent a decade trying to develop a material that mimics skin's ability to flex and heal, while also serving as the sensor net that sends touch, temperature and pain signals to the brain. Ultimately she wants to create a flexible electronic fabric embedded with sensors that could cover a prosthetic limb and replicate some of skin's sensory functions.

Bao's work, reported today in Science, takes another step toward her goal by replicating one aspect of touch, the sensory mechanism that enables us to distinguish the pressure difference between a limp handshake and a firm grip.

"This is the first time a flexible, skin-like material has been able to detect pressure and also transmit a signal to a component of the nervous system," said Bao, who led the 17-person research team responsible for the achievement.

Benjamin Tee, a recent doctoral graduate in electrical engineering; Alex Chortos, a doctoral candidate in materials science and engineering; and Andre Berndt, a postdoctoral scholar in bioengineering, were the lead authors on the Science paper.