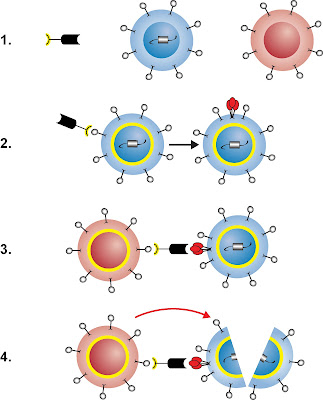 (October 21, 2015)  WHAT: Scientists at the National Institutes of Health (NIH) have created a protein that awakens resting immune cells infected with HIV and facilitates their destruction in laboratory studies. The protein potentially could contribute to a cure for HIV infection by helping deplete the reservoir of long-lived, latently HIV-infected cells that can start making the virus when a person stops taking anti-HIV drugs. Further studies in animals and people are needed to determine the viability of this approach.

The researchers found that the protein, called VRC07-αCD3, triggered the activation and killing of latently HIV-infected helper T cells taken from patients on antiretroviral therapy when the cells were incubated in the lab with the patients’ own killer T cells. In addition, the scientists found a monkey-adapted version of the protein to be safe and well-tolerated when given to monkeys infected with a simian form of HIV and receiving antiretroviral therapy. The researchers are now studying the effectiveness of monkey-adapted VRC07-αCD3 in the animals.