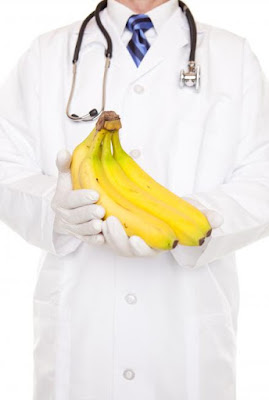 Bananas contain a substance that, when changed slightly
by scientists, shows promise as an anti-virus drug.

A banana a day may not keep the doctor away, but a substance originally found in bananas and carefully edited by scientists could someday fight off a wide range of viruses, new research suggests.

And the process used to create the virus-fighting form may help scientists develop even more drugs, by harnessing the “sugar code” that our cells use to communicate. That code gets hijacked by viruses and other invaders.

The new research focuses on a protein called banana lectin, or BanLec, that “reads” the sugars on the outside of both viruses and cells. Five years ago, scientists showed it could keep the virus that causes AIDS from getting into cells – but it also caused side effects that limited its potential use.

Now, in a new paper published in the journal Cell, an international team of scientists reports how they created a new form of BanLec that still fights viruses in mice, but doesn’t have a property that causes irritation and unwanted inflammation. 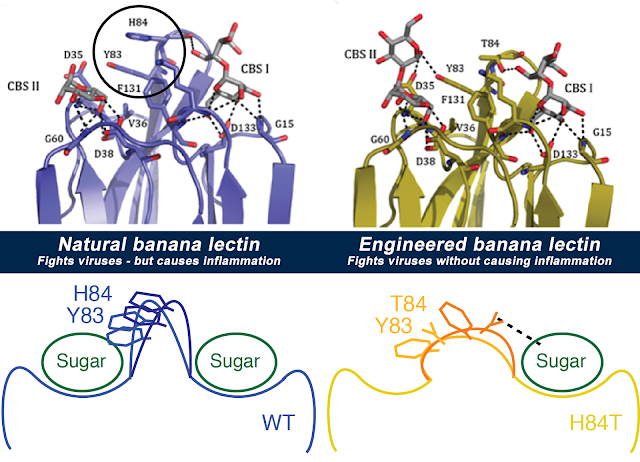 By studying the banana lectin molecule (top left) and what made it bind to both viruses
and immune system cells (bottom left), the team was able to figure out how to change
the way cells bind it, to make a new version (top right) that still binds viruses
but doesn’t cause inflammation (bottom right).

They succeeded in peeling apart these two functions by carefully studying the molecule in many ways, and pinpointing the tiny part that triggered side effects. Then, they engineered a new version of BanLec, called H84T, by slightly changing the gene that acts as the instruction manual for building it.

The result: a form of BanLec that worked against the viruses that cause AIDS, hepatitis C and influenza in tests in tissue and blood samples – without causing inflammation. The researchers also showed that H84T BanLec protected mice from getting infected by flu virus.

“What we’ve done is exciting because there is potential for BanLec to develop into a broad spectrum antiviral agent, something that is not clinically available to physicians and patients right now,” says David Markovitz, M.D., co-senior author of the new paper and a professor of internal medicine at the University of Michigan Medical School. “But it’s also exciting to have created it by engineering a lectin molecule for the first time, by understanding and then targeting the structure.”